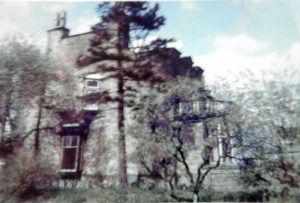 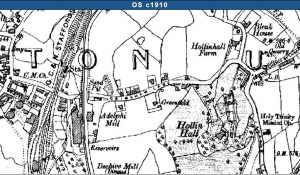 Above top photo is Greenfield probably taken in the 1960s. Below this photo is a map showing the location of Greenfield in 1910 which is seen in the centre.

Greenfield or Greenfield House is an upstanding detached Victorian house on Grimshaw Lane. It was occupied for many decades in the 20th century by the Cumberbirch family.

Harold Cumberbirch, founder of the construction company, is listed as living at Greenfield in the 1914 Kelly’s Directory. Below are photographs taken over the many years the Cumberbirch family lived at Greenfield. 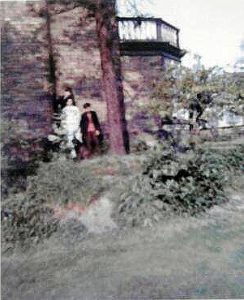 Above, John, Gerald and Arthur Lashford, grandsons of Harold and Cissy Cumberbirch and Great Grandsons of Fanny Cooke-Henstock in the garden of Greenfield around the early 1960’s. 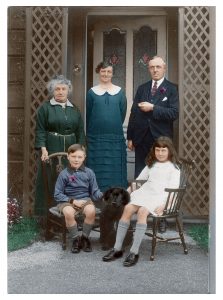 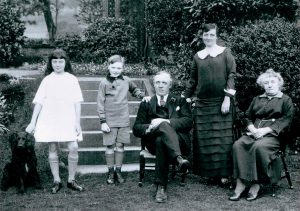 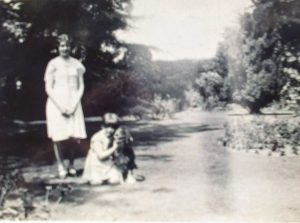 Above is Mary Cumberbirch standing and Lilly Braithwaite 1928. 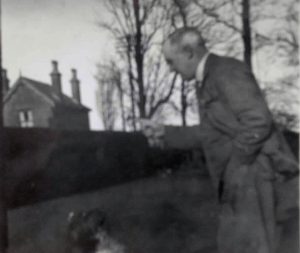 Above, Harold Cumberbirch on the grass tennis court at Greenfield. 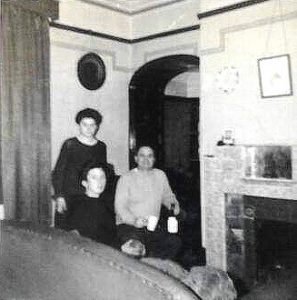 Above, Left to right … Arthur Lashford, John Lashford and their father Reg Lashford taken in the morning room at Greenfield in the 1960s. 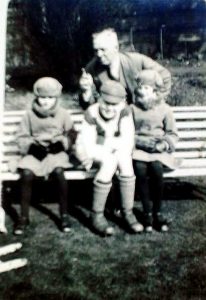 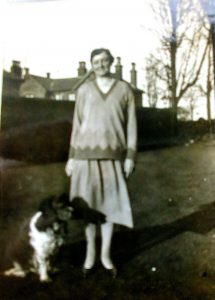 Above, Cissy Cumberbirch on the tennis court at Greenfield around 1930. 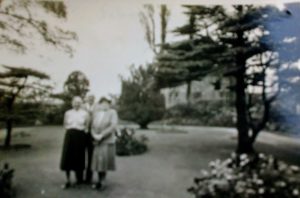 Above In 1950 in the front garden of Greenfield, a little blurred, but the house Jevington can be seen in the background. The three figures are Cissy Cumberbirch on the left, Harold Cumberbirch centre and Mrs Braithwaite on the right. 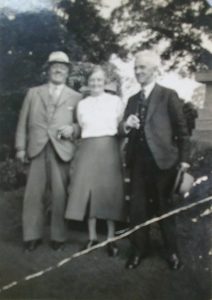 Above, Harold and Cissy Cumberbirch and Harold’s brother Hedley in the 1940s. 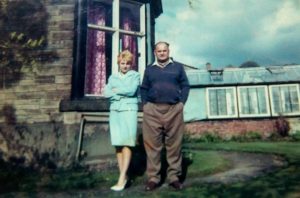 Above, Mrs Jessiman and Mr Reg Lashford in 1965.

The Cumberbirch family sold the house to Dr Baker in 1967.

The Bakers sold Greenfield in 1980 to the Thorneycroft family.

1857: Pigots Directory lists Thomas Cook as living at Greenfield. He was a stone merchant.

1881: Margaret Cooke lived at Greenfield, she was fifty eight years old and single. She was born in Bollington and described as an accountant, she was probably a descendant of Thomas from the above record of 1857. Living with her was Arabella Earl a servant aged forty one years.

1891: William Belfield lived at Greenfield House as it was named then. He was thirty nine years old and a cashier and salesman for a cotton mill. He was from Macclesfield. His wife Elizabeth was thirty four years old and from Prestbury. They had three Bollington born children Edith aged thirteen years, Mabel aged nine years and William aged three years.

1897: Maria Oliver nee Creswick lived at Greenfield as a widow of Thomas Oliver born 1821. It is unsure if Thomas lived there too up until his death in 1897.

1901: Nathaniel Irving aged forty four years and from Sheffield was living at Greenfield on this year, formerly of Palmerston street, he was manager of a Olivers cotton mill. Also living there was Maud Mary Oliver aged thirty three years and from Bollington, Maud was the daughter of Thomas Oliver (1821). Maud was a shareholder in her fathers Mill Olivers.There was a sick nurse living at Greenfield at this time, her name was Elizabeth Cabb. She was forty four years old and was born in Somerset. Also present was a nineteen year old servant named Harriet Heathcote from Lyme Handle, Cheshire.

1911: Nathaniel Irving was still listed as living at Greenfield with his now wife Maud Mary (nee Oliver). The census says they have been married for twelve years which doesn`t quite fit in as Maud was still an Oliver in the 1901 census. They had a child but it is listed as deceased. Nathaniel is now described as a Carrier Cotton Spinning Co.They had two servants, thirty five year old Mary Alice Hughes from Burton On Trent and twenty four year old Janet Lily Blower from Minsterley, Salop..

Our thanks go to Linda Stewart, who has researched census information to present an interesting history of the house’s residents.

And special thanks go to Arthur and John Lashford who provided most of the photos and descriptions above.