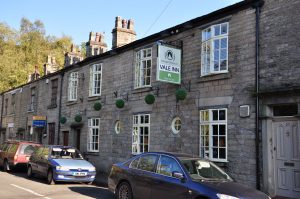 Re-opened – garden seating with a new bar! All in the car park.

Since reopening in March 2005 the Vale has gone from strength to strength to establish itself as a real ale and fresh food pub. After winning CAMRA Pub of the Summer in 2006, in only its 2nd year, the Vale then won East Cheshire Pub of the Year 2007.

You’ll have to pop down to the newly refurbished Vale Inn to find out just how good it is. Gone is the worn and sticky carpet, the Vale Inn sports a new, clean and fresh look but don’t worry it’s still as cosy and welcoming as always. There’s a new head chef too who promises even greater things will come out of the kitchen. Table service, no more ordering at the bar!

If you’re out and about in Macclesfield and fancy trying somewhere new why not visit the brewery’s second pub, The Park Tavern on Park Lane. It serves the same selection of great beers as well as ciders and Moravka lager. And in Poynton, their third pub opened in autumn 2013, the fully renovated Cask Tavern in Park Lane (Park, Lane and Tavern seem to be a theme for this company!)

Close to the Recreation Ground, Middlewood Way and the Macclesfield Canal, there are two beer gardens and a car park. Inside there is an open friendly feeling, a touch of the old pub remains with the original slate bar from the 80’s and a taste of the new with a redesigned back bar. A real fire completes the comfort in winter.

keeps a list of ales currently being served and an up to date menu can be printed off.

The Vale holds a number of Beer FestiVales each year with up to c.30 different brews to sample. Watch for notices of these.