There have been several Methodist chapels and churches in Bollington. The original four individual groups have merged together to leave us with just one church today, in Wellington Road, but this is no longer used as a place of worship, the small congregation having moved to Macclesfield. There have been three Methodist buildings on this one location, originally known as Knowles Green, since 1808.

The first building close to Bollington built for Methodist worship was on Billinge Hill (Rainow, but overlooking Bollington), a small chapel which was in use from 1781-1807. It was sold when it became too small, and is today a cottage.

The first Methodist chapel built in Bollington was opened in 1808 on the site of today’s Methodist church in Wellington Road, an area known then as Knowles Green. The ground was provided by Peter Lomas, owner of the nearby Waterhouse Mill. The chapel was also used as a Sunday School for the children until purpose built accommodation was provided close by at the Large Sunday School at the bottom of School Brow (Hurst Lane). 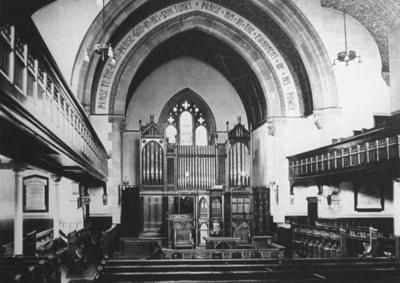 The picture (left) shows the original interior of the present building. In the 1980s major changes were made to improve its usefulness. A new floor was built approximately on the line of the balcony to divide the building horizontally, providing a church on the top floor and offices and function rooms on the ground floor. I believe the organ was removed at this time.

In 2008 the tower spire was completely rebuilt. In 2012 the Methodists ceased worship here and the building was sold. In 2016 the lower floor was converted for use as a childcare business called Daisybank Nursery. The upper floor is one of the best performance spaces in Bollington so we were particularly sad to lose it when the building was put up for sale. It was especially good for Bollington Brass Band concerts. After a gap of some years it was a great pleasure to once again hold the annual Remembrance band concert in the building on 13 November 2016.

The church is a Grade II listed building.

During 2008 a number of events marked the 200th year of Methodism in Bollington.

This was a ‘tin tabernacle’ on the corner of Grimshaw Lane and Rose Bank.

This was a huge building in High Street standing where High Court is today. It was built in 1859, and demolished in the 1960s after it became unsafe (thanks to Janet Roberts for that bit of info). Harry Bamford a local Bollington builder bought it when it ceased to be a place of worship and used it to store building materials (thanks to Malcolm Brunt

My thanks go to those who researched and discovered the history that is presented in these pages, in particular to Jean Wright who wrote her researches up for the book, 200 Years of Bollington Methodism. Please read the full acknowledgement of their remarkable achievement.