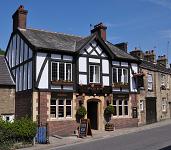 A pleasant old building in Brewer’s Tudor style right in the centre of old Bollington, noted for its wood panelled interior, the Holly Bush was, in early 2016, given a complete refurbishment. It looks fabulous and is very popular with the local community.

The Holly Bush was (in early 2014) listed by English Heritage in recognition of its historic interest. It is a very fine example of an inter-wars urban public house and was, until the recent refurbishment, very little altered since it was created in this form in the 1930s. It is notable for the ‘Brewers Tudor’ timbering on the front and the high quality panelling and timber work inside. The refurbishment was carried out very well and while the pub was changed considerably inside it is mostly for the better, with retention of the famed, and protected, wood panelling. The only major loss from the old pub was the over-size bar – but the noted bar top front and shutters were retained in the new back bar.

The listing document gives an interesting description of the architectural merits of the building.