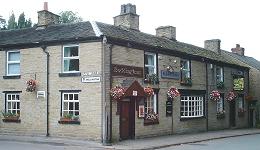 Right on the boundary of Bollington and Rainow, this handsome stone building, adorned in summer with luxuriant window boxes and hanging baskets, houses a friendly and cosy award winning country pub. The staff are chatty and cheerful. One of only two free houses in Bollington and with an entry in the Good Beer Guide. Regular winners of CAMRA awards! Arguably Bollington’s most popular pub, The Poachers is a particular favourite of your webmasters!

Originally called ‘The Masons Arms’, the landlord and landlady after the first world war were Eliza Leigh and Albert Swindells. The Inn is on the boundary between Bollington and Rainow. A Boundary stone can be seen in the wall opposite the pub. The Inn was created by merging a few cottages together over the years.

And finally ‘The Poachers Inn’ which has been owned and run by Rob & Helen Ellwood since July 2000.