The term Rally Road is a local corruption of Rail Road or, as we would normally call it today, a tramway. This was constructed by William Clayton in the mid 1830s from Bridge Quarry, high on the west side of Kerridge Hill, down to the then recently built Macclesfield Canal (1831), where the dry dock and wharf are today.

While the route of the entire tramway is easily seen today, there is not a single artefact remaining visible. It is also regrettable that we have never seen a picture of the tramway in operation. However, we can still deduce plenty about its layout and operation from the 1871 OS 25 inch map. A very short section of track was discovered under the grass near the dock and from this it was determined that the gauge was 3ft 6ins (just over 1 metre) and that the rails were in wrought iron. See the page on Kerridge Wharf and Stone Saw Mill.

I recall seeing, in the late 1970s, the last of the stone blocks on which the rails were laid, close to the entrance to Endon Hall. The picture shows a short row of these blocks, each with two holes into which the wooden pegs would be driven in order to hold the rails down. There would be another parallel row 3ft 6ins away for the other rail. However, these have disappeared under road making materials. An example of the track has been unearthed at Kerridge Wharf (dry dock) and it was very similar to that which can be seen today at Bugsworth basins

, at Buxworth near Whaley Bridge. This was laid out in the late 1790s, while the Clayton track would have been laid around 1836. The Rally Road is known to have been out of use by about 1870. 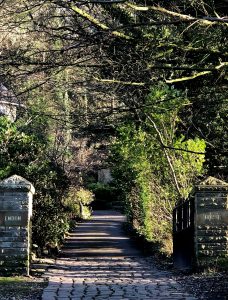 The top end of the Rally Road in December 2019 as it passes Endon House. Incidentally the `Rally Road` had become Crown property in the 1950s on the closure of Whettonʼs Quarries. The former owners of Endon House were able to buy it from the Treasury Solicitors in the 1980ʼs. Most of the road is built on tipped quarry waste, known locally as scrapplings