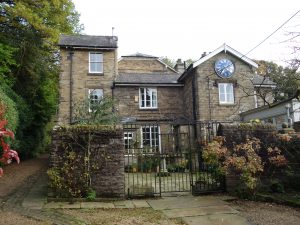 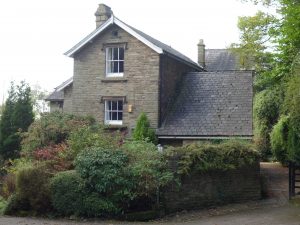 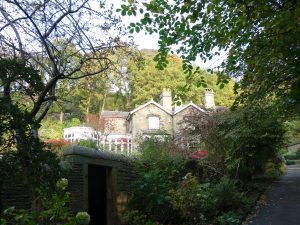 Endon House above (Photo`s taken 2018) has the distinction of having it’s own private road and this road is used regularly by the public. It’s gate was closed one day a year on New Years day thus demonstrating to the ordinary villagers that it was not public right of way. But that does not happen nowadays. Incidentally the Rally Road had become Crown property in the 1950s on the closure of Whettonʼs Quarries. The former owners of the house were able to buy it from the Treasury Solicitors in the 1980ʼs. Most of the road is built on tipped quarry waste, known locally as scrapplings 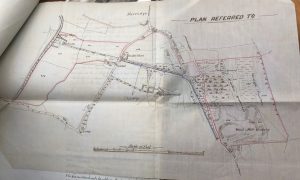 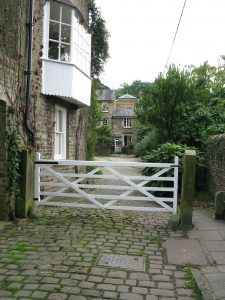 Endon House was built in 1837 by William Clayton who also built Victoria Bridge on Windmill Lane to go over the Rally Road around the same time. Clayton had built and lived in Endon Hall since 1820. However, Endon House as we know it today is not on the 1875 map,(see map above) Endon Hall was actually then called Endon House. It has been said that the Clayton family came from Endon in Staffordshire hence the name given to the estate. It is however, documented that William Clayton was a member of an old Macclesfield family from `Titherington`,and was a cotton manufacture. In 1791 he leased a colliery from Thomas Ward and Thomas Wardle of Upper and Lower Swanscoe . Clayton then bought the Endon estate in 1833 and began to develop the lands and properties. Clayton`s success at the colliery saw him converted from a cotton manufacturer of `Titherington` on his lease  of 1791, to a coal proprietor of Adlington when he signed the Endon deeds on 4 march 1833.

He built cottages such as Rose Cottage, Kerridge, Endon Cottage (Ivy Cottage) as well as Endon Hall, Endon House and Endon Lodge and also bought Charles Roe’s Windmill on Macclesfield common used for grinding Calamine ore for the companies brassworks. This was re-erected close to the quarries – Kerridge Windmill. It is thought that corn was ground at the windmill but only for a very short time. By 1841 William was forced to take out a loan and this made him realise he was getting on in years and decided to make financial arrangements in case of his death.

He died on 23 July 1850 followed by his wife and then his only male heir by 1873. The estate passed to his great nephew Thomas Rylance Gibson a barrister of London. Gibson amounted debts and by 1875 the estate was sold to Peter Pownall Brocklehurst of Hurdsfield. Later it sold to Livesay and Sheldon from Kent and then to Wettons the quarry owners. 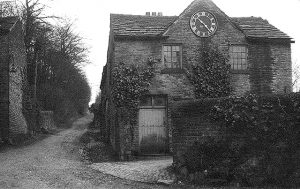 The stables at Endon House (photo left) in the early 1900s. Originally the building described as being on Garret Brow, a continuation of Higher Lane, was a Smithy owned by the Davenports. The local horses were shod here and it was generally known as a `gossip shop`. Mr Dan Massey a local Wheelwright and joiner had a workshop adjoining the stables at around the time of Sir Henry Files MP occupation of Endon House so we know that to be 1911. After WW1 Kerridge became an establishment of a centre for horse breaking to carriage. This was carried out at the stables next to Endon House and described as being at the bottom of Victoria Bridge steps possibly in the building now called Quarry Bank. The stables were rented by Mr Edward `Teddy` Carlisle of the military service artillery and a born horseman. He was assisted in the horse breaking by Mr H Fox. The road ‘through Underwood to Swanscoe’ was used initially which I take to mean the right fork past the stables, now a public footpath to Swanscoe. Once the horse was ready to pull a carriage this was done on Windmill Brow (see photo below) which is the road going straight up from Endon House to Windmill Lane, as seen on the left of the stables in this photo above/left. Teddy Carlisle died in the second World War aged forty eight years. 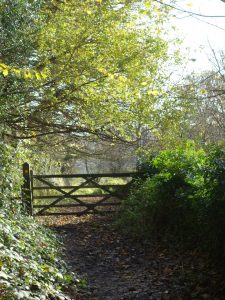 The above photo was once known as Underwood. It goes from Endon House to Swanscoe.

Following WW2 the stables (not the Quarry Bank side) were altered by taking away the upper floor, and the clock was moved to the house. The upper floor was once believed to have been a workshop where coffins were made.

A second clock was located on the northern end the house. The winding mechanism for this had been removed and only faded black Roman numerals were discernible on the stone clock face. An electrically operated clock with a blue face was erected here in the 1980s. It is not immediately obvious why two clocks were needed back in the day when the quarries were in their heyday. A possible explanation is that they were both facing towards Higher Lane where most of the hundred or so quarry workers had to pass in order to get to the quarry, so with two clocks, arriving on time could hardly be in dispute. Accurate time keeping only became available nationwide with the introduction of wireless sets in the 1920s. It is thought that Endon House was built for the Quarry Manager and strategically located at a pivotal entry point to the quarry from Higher Lane – via the long staircase up the incline through Victoria Bridge. 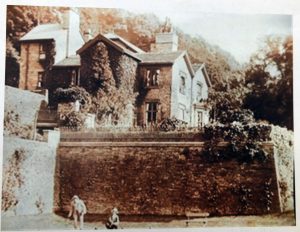 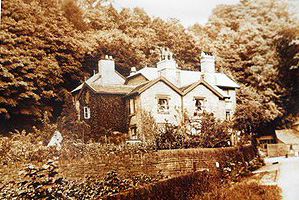 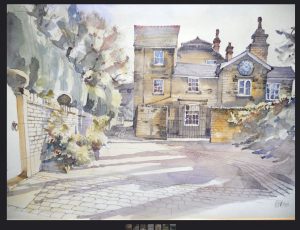 Painting above of Endon House done in 1983 by William Geldart of Henbury.

1826: John Vaughan owned the estate, he was also from Heaton Norris.

1833: Vaughan sold Endon Estate to William Clayton for £8,400 which included an estate called Oak on the north west route along which the Macclesfield canal was being constructed.

William Clayton built Endon House for his manager Williamson in 1837.

1843: John Upton Gaskell lived at Endon House for a few years with his wife Margaret Elizabeth Grimshawe from Errwood Hall.

1849: Philip Davenport `and another` were occupying Endon Hall as stated on the Tithe map which also says two houses.

1861: William Young aged fifty one years and from Scotland lived at Endon House, he was a merchant for cotton goods. He lived with his Scottish born wife Marion aged forty nine years along with their Manchester born children aged between eight and thirteen years of age. They also had four servants, a cook from Bradford, two housemaids from Gawsworth and Ireland and finally a nurse also from Ireland.

1871: Endon House is listed as being on Oak Fold which we think is the Rally Road as we know it today. Elizabeth Dickens aged thirty eight from Adlington, Cheshire, lived at Endon house with her four children aged between eight years and eight months. Elizabeth is listed as married but her husband was not at home that day.

1881: Sarah Millward aged fifty five years was a servant cook and was living at Endon House with Elizabeth presumably her daughter aged twenty five years. Sarah is listed as married but no husband is mentioned. We can only presume that the head of the house was away on business at the time of the census.

1896: Thomas Arthur Collier was living at Endon House according to Kelly`s Directory.

1901: Endon House was still occupied by Thomas Arthur Collier a retired drapery wholesale merchant aged forty one years from Manchester. He lived with his wife Amy who was from Lincolnshire and their three servants. The Colliers were popular residents after organising and allowing their field to be used for the Endon Fete in 1901/02.

bought Endon House from William Wetton/Whetton. Sir Henry Fildes was once visited at Endon House by the Prime Minister Lloyd George in 1922.

1939: Vincent Keeney lived at the lodge, he was a butler valet aged thirty five years. He lived with his wife May aged thirty six years and their son Robert nine years.

1953: The Bunting family bought Endon House after Sir Henry and his wife died.

1979: Les Wilcox owned Endon House at this time, he was a local man and had three generations living with him hence an extension or three.

The current owners of Endon House have lived there for twenty six years [to 2019].

Below are two catalogues of sales in 1910 and 1919 of Endon House, Field Cottage and Rose Cottage along with plots of land around them. Sorry they are just photographs for the moment, too big for my scanner. As they are not very clear yet if you want better close ups please contact me and I will zoom in on the sections you want.

Once I have access to an A3 scanner I will get them up to standard. 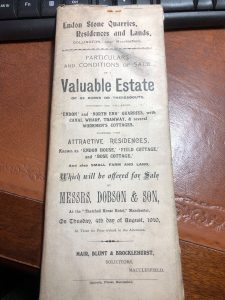 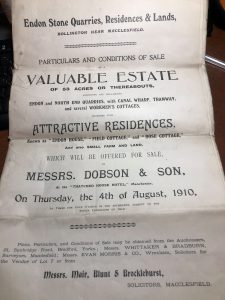 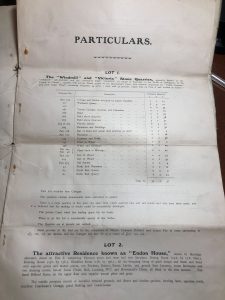 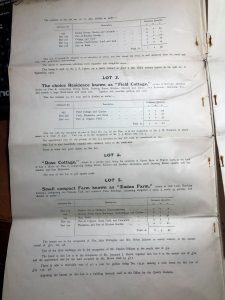 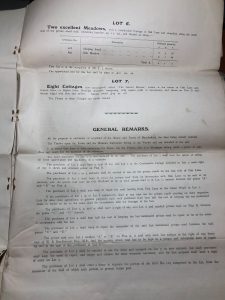 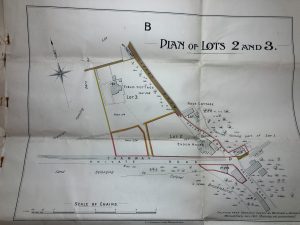 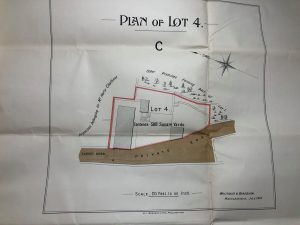 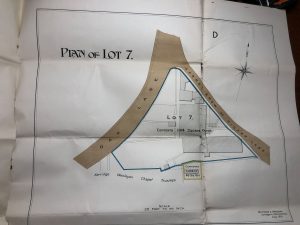 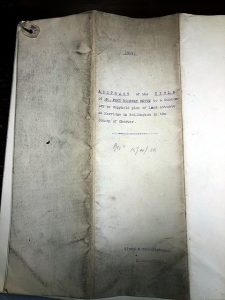 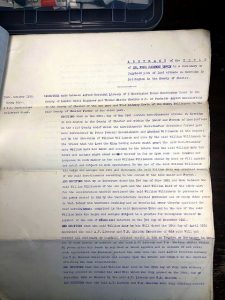 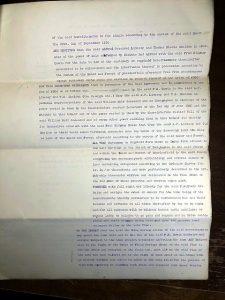 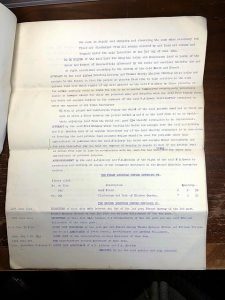 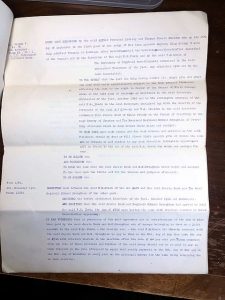 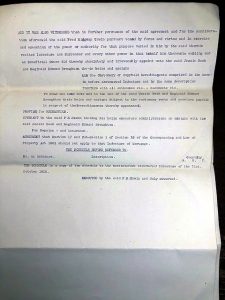 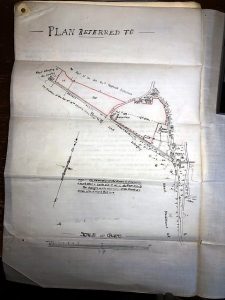