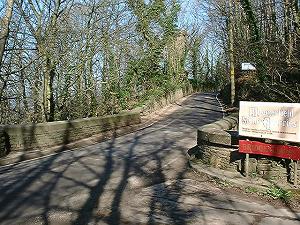 Known by old Bollingtonians, the miners and quarrymen, as the ‘top road’, and as early as 1270 as ‘le sideway‘, and also known as Township Road in the 1800`s. Windmill Lane runs all along the west side of Kerridge Hill about half way up the hill. The lane starts at the top of Redway, by the cottages, by the very steep entry to Cheshire View, and continues almost straight and level along the hill, over Victoria bridge, past a short lane up to Turret Cottages then to Five Ashes, and a short distance further to the end on end junction with Kerridge Road at Marksend (marked on the road side by two street name signs side by side).

Incidentally Five Ashes acquired it`s name around 1954 and referred to the five outside toilets in a block opposite the cottages. The toilets were made of stone with a large plank to sit on. No water was involved just a pile of ashes from the coal fires. When the household bins were emptied the ashes were cleaned out of the toilets and went to the tip too.

Thankyou to Michael Tetlow for that information on Five Ashes

Approach from Redway, Rainow or Hurdsfield.

We can see the effects of quarrying along the hillside, large areas of extraction surrounded by huge numbers of sycamore trees. Well at least they hide the worst of the industrial waste! Windmill Lane would once have been relatively open with glorious views to the west, indeed, even as recently as the 1970s it was possible to enjoy the views from several places along the road. Nowadays, the tree growth ensures a shaded and secretive road with just the occasional view through gaps in the trees. Along the northern end of the lane there are several ginnels which lead into the quarries. Only four quarries are active today, Sycamore, Bridge and Five Ashes, and Marksend in the Rainow section, with Five Ashes being used also for earth disposal.