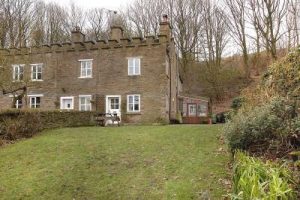 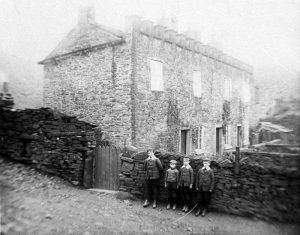 Formerly two cottages and a Smithy and explosives store (nearest in the photo). Now they are three cottages, c.1840.

They were built by William Clayton to house quarry workers.

1897: Joseph Oldham lived at one of the cottages.

1901: Albert Whitehurst was a resident this year in one of the cottages.

1901: George Shatwell aged fifty two years old was a labourer in a stone quarry. (the third boy from the left in the photo is Len Shatwell, most probably a youngest son of George). George lived with his wife Margaret aged fifty one years. Both were from Bollington. Fred another son aged twenty also lived there and he too worked in the quarry.

In the middle cottage (supposedly number 6) was George Goodwin aged forty three years, a stone dresser from Bollington. His son Jim is the boy on the right in the photo. George lived with his wife Florence aged forty one years and their six children.

The third cottage was occupied by Bertram Shatwell aged twenty six years. He was a stone mason from Manchester. He lived with his Bollington born wife Fanny and their two year old son Harry who is seen a few years older on the left of the four boys in the photo along with Horace and Len Shatwell possible cousins to Len as the Shatwell family occupied more than one cottage. (please put me right on this)

Linda Stewart `s own late Uncle Edward `Godfrey` Allen was born at number 4 Turret Cottages on December 5 1931, he lived there for two years before moving to 36 Redway (once known as `Two Pence Ha penny row`) where the Allen family lived for nineteen years and where Linda`s own mother Berniece was born in 1937.