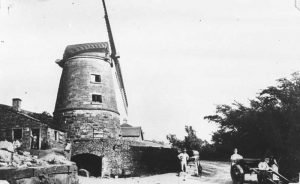 To the left of the cottages at Five Ashes, along Windmill Lane, there now stands a nice garden with a new stone wall around it. The lawn marks the spot where Kerridge windmill once stood (left). It is thought that the mill was actually second hand and came from Macclesfield Common (see panel below), part of Charles Roe’s industrial complex, developed from 1758. A description of the copper works written in the 1790s mentions ‘a large windmill for grinding the ore.‘ The copper works closed in 1801, but that windmill was converted to corn milling, and was in full use by 18061. 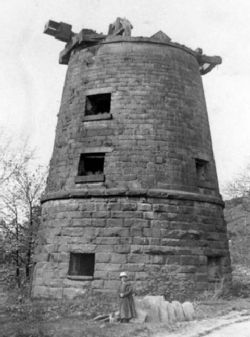 It is thought that it was then dismantled, transported and re-assembled at Kerridge in the 1830s. It is also thought that it was used at Kerridge for milling corn although George Longden writes that he has seen no evidence for this, or for any other use for that matter. It is thought to have been erected at Kerridge probably by William Clayton who had by then bought the Endon estate and built Endon Hall, and Endon House, as well as Turret Cottages and the tower on Windmill Lane, and was developing the estate in many ways.

The top picture shows the mill with just two sails. This would be unusual, and an older picture, c.1880 (left), shows it with the more normal four sails. It isn’t clear whether the mill was ever used with two sails, or whether the mill was out of use when the top picture was taken in the 1890s. In this lower picture, the sails appear to be without their sail cloths, and this indicates that the mill may well be out of use. This lower picture also shows that the head of the windmill could rotate to face the wind – you can see the wheel on the back for winding the head round on its track. 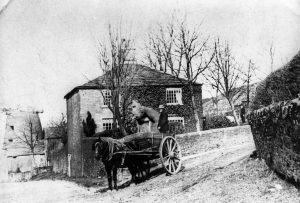 However, the windmill was out of use and abandoned by the early 1900s (above right). It fell into disrepair and became a ruin. During WWII the military were looking for stone and other rubble to build airfield runways2 and many of the derelict buildings in the Bollington district were carried away to Burtonwood airfield, just by where M&S and IKEA are today at Warrington.

The site remained empty until the present garden was constructed in the early years of the 21stC.