Home » The Town » Recreation Ground » Friends of the Rec.

Friends of the Rec.

We have had some great fun events in recent summers! A Summer Fair was held in 2011. A large crowd of Bollington folk came and had a great time despite the heavy shower of rain that got everyone running for cover!

In 2012 we planned a similar event for the Queen’s Jubilee weekend. But the weather defeated us, and a Rock Band event went the same way. Torrential rain before and on both days meant that we had to cancel all the field activities that so many were looking forward to. But a good picnic was held in the Pavilion on Jubilee weekend with freshly cooked burgers being prepared under the verandah!

So we were looking for better weather in 2013! Well it was better, if not perfect, for Rock on the Rec held on Bank Holiday Monday in May. There was a huge turnout – well over 1,000 people enjoyed the fun and games – great slides and many other stands for everyone’s enjoyment. A similarly successful event was held in 2014. Events of this kind are organised each year.

The Friends of Bollington Recreation Ground (FOBR) are an energetic group of volunteers working to help keep the ‘Rec’ as a welcoming place for the benefit and enjoyment of the local community. Working in partnership with Cheshire East Council, who are responsible for the upkeep and maintenance of the Rec, the Friends help with improvements to the general environment and appearance. The Rec is used regularly for football, cricket and bowls and the refurbished tennis courts are very popular in fine weather.

The Friends organised a number of dog awareness sessions which were held on the Recreation Ground. The purpose was to ensure that all dog owners who regularly walk their pets through the Recreation Ground fully understand what is expected of them with respect to maintaining control of their dog(s) and preventing fouling. The latter has at times been a serious problem but in more recent times the message is getting through that leaving fouling in the public areas is just not acceptable, as well as being illegal. 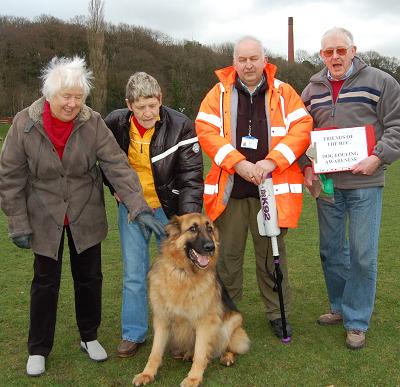 At the first session FOBR chairman John Kershaw together with the Macclesfield Borough Council Environmental Enforcement Officer, Tony Forrest, and dog Psychologist and Behaviourist, Joan Bradley, were joined by several volunteer Friends to intercept dog walkers, give them the MBC leaflet on the subject, and ensure that they all knew the rules.

Clubs making major use of the Recreation Ground

There are several clubs that make major use of the facilities of the Recreation Ground, some on a seasonal basis. They include …

Did you know that Bollington Recreation Ground was once the Cheshire County Cricket Ground? Amazing but true – in 1908!