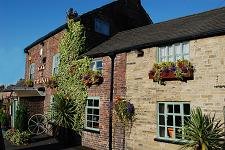 Delightful pub set on the south western edge of Bollington Cross. Many small rooms, nooks and crannies provide everyone with a cosy privacy in this, one of Bollington’s oldest buildings. Modern conservatory for outside atmosphere on a grey day.

1851: James Clark ran The Cock as it was known then. He was originally from Irlam in Lancashire. His wife Sarah was fifty eight years old and from Wilmslow. Their daughter, also Sarah, was twenty eight and from Butley as was her brother James, he was twenty one years old. There was also a three year old grandson named William who was born in Macclesfield. It is not clear who/where his parents are, perhaps his father is John H Clark who appears in the next census ten years on.

1861: James Clark was still occupying The Cock Inn but was no longer head of house at seventy four years of age. His son John H (not mentioned on the previous census) was now Publican, he was forty one years old (died 1888). His mother Sarah, now sixty eight years, was also still resident.

1871: William Rackham and his family were running The Cock Inn. William was from Suffolk and was aged fifty four years. His wife Mary Hemp Rackham was two years younger and from Lichfield. They had two sons, William Samuel was twenty three years old and was born in Derby, he was a solicitors clerk at this time. His brother Henry was just sixteen years old and was originally from Chelford. Henry was a Bankers Clerk.

1891: Susan H Hunt a forty three year old widower from Knutsford was the publican of The Cock And Pheasant in this year. She had two daughters and a son living with her. They were Margaret H aged eighteen years, Mary E was sixteen years of age and their seventeen year old brother James and as described as a gardener, was the only sibling seemingly employed. All three were from the Knutsford area. There was also a boarder living with them, Charles J Fitton who was a thirty four year old labourer from Durham

1901: Albert Snape aged fifty three years and from Hazel Grove was the landlord of the Cock & Pheasant at this time, he lived alone. Albert died the following year on 2nd of October.

Around this time the two cottages attached to the Inn were occupied by firstly the Turner family, head of the house was Isaac Turner a forty two year old gardener from Prestbury. His wife was Mary aged thirty seven years and from Alderly, she was his second wife, his first being Margaret Gertrude Hobson. The end cottage known later as ‘Cappers Cottage’ or `Cappers Corner` was occupied by fifty one year old Thomas Capper and his family which included his second wife Elizabeth aged thirty nine years. The three children were a mixture from his first and second wife and aged between three and seventeen years. The youngest child Agnes ended up staying in the house a long time.

1906: According to the Kelly’s Directory John William Pritchard again lived at the Cock & Pheasant so perhaps had been away on the day of the 1901 census or the directories had not been updated.

1911: The Inn was by now occupied by publican Joseph Alfred Heath aged twenty seven years and from Bugsworth (village now known as Buxworth) in Derbyshire. His wife Edith Jane aged thirty three years and from Newmills is described as ‘assisting in business’. They had a child aged just one year and was named after his father.

Next door was still Isaac Turner and his wife, they now have seven children aged between five and twenty years, three of which were named Joe, Jim and Kathleen.

In the end cottage was still Thomas Capper who had magically lost five years from his age and was just fifty six! There were two children still at home, Herbert aged nineteen years who was a cotton mule piecer, and Agnes who was thirteen years old and employed as a cotton weaver.

Sometime between 1907 and 1950 Father and son Thomas and John Bradbury had the address of The Cock And Pheasant according to the Cheshire School Records.

To the left of the Inn as looking from the road there had been double doors and the area behind them had been used for storing beer. Then later it was Charlie Goodwin`s Garage which repaired bikes (push bikes presumably), and before that a rag and bone man with his horse and cart used the garage, he was nicknamed Ben Rags!

1934:  The landlord of the Cock And Pheasant was Frank Davaney, according to Kelly`s directory,

1951: Joseph Hampson was licensee at the Cock and Pheasant in this year with his wife May. The pub was selling ales from the Clarkes brewery. His daughter Dorothy Grindey took the photo above, the pram in the photo outside the Inn belonged to Dorothy`s sister Valerie

The two cottages attached to the right side Cock & Pheasant (looking from the road) were eventually to become part of the pub, probably in the late 1960s.

Thanks go to Wendy A Cheetham nee Clayton for a lot of information on past occupiers of the Cock And Pheasant and it`s adjoining houses.