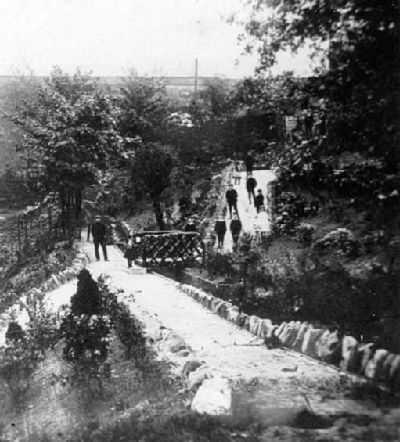 In ancient times the operation of a corn mill was in the gift of the monarch, in this case Queen Isabella [was wife of Edward II, then regent to her son Edward III], and she granted the mill of Bolyngton to William de Shirborne for life. He enjoyed this only a few months, and then the Black Prince granted it to Robert of Plumstoke his yeoman and barber for life. It then passed to William Soty a yeoman for life1. This was in the period c.1340-76 (14thC) so this was a very long established mill.

Bollington has had two corn mills – the oldest one, that referred to above, is thought to have stood on the site of Rainow mill in Ingersley Vale, and the other, a 16thC construction, was behind Bollington Hall Farm on a site now in Riverbank Close.

The 16thC mill known as Bollington mill (Riverbank Close) closed in 1913 when it was grinding bone rather than corn. It became derelict and the last remains were finally cleared when the housing estate at Riverbank Close was developed (1970s?). Unfortunately, no pictures of the mill or its remains have ever come to light.

There is nothing at all left to show its exact position. This mill was water powered, receiving its head water via a long leat which came all the way from a point unknown at Bridgend (behind Broadhead’s garage or the Bridgend Centre in Palmerston Street *) or beyond. The course of the leat is visible today as the footpath that runs through the trees on the south side of the Recreation ground (picture right), parallel to Palmerston Street. The footbridge over the river Dean at the east end of this path – by the river tunnel – is in fact an aqueduct built to carry the leat over the river. The leat still exists under Wellington Road – the deeds of several cottages show it running under their front door steps!

This is pure conjecture – I have no hard evidence for the ideas that follow, just an element of logic applied to physical evidence!

There is no evidence of the mill leat coming off the river at Bridgend; it has always been an assumption. It is reasonable to assume that the leat took its water from the river Dean below the confluence with the Harrop brook, in order to obtain maximum flow from the two rivers. We know that, before the canal was built in the late 1820s, the river Dean flowed across the ground where the war memorial garden is today, and went through where the canal embankment is today, before wending its way across the Recreation Ground towards the weir – that was the take-off point for the leat to Waterhouse mill. We also know that the Bollington mill leat passes under the embankment – we can see it in the form of the small stone aqueduct over the river in the corner of the Recreation Ground, the footpath bridge today. In 2009 the roadway at the junction of Clarence Road and Palmerston Street collapsed and the hole went down about four metres before the council decided not to dig any further. I estimate that this is exactly where the leat passes under the road, and would be at a depth of about five metres, so they just didn’t go down far enough to find it.

Now, considering all this, one can conclude that if the leat came off the river at Bridgend it must have crossed the river somewhere. I think this very unlikely. I suspect that the connection with the river was where it first met the river. If you draw a line on the map from the known location alongside the Recreation Ground, that point is going to be approximately where the bus shelter is today, on Palmerston Street, beside the memorial garden. That is where I believe the leat connected with the river, the intake.

This connection would have been lost when the canal was built in 1830 and the river diverted into the tunnel. We know that the mill continued in operation until 1913, almost 85 years later. So the question is: how did they supply the leat with water after 1830? I am sure that the leat must have continued in use, otherwise why would they have built the little aqueduct and provided a culvert beneath the canal embankment and beyond (under the road collapse)? Maybe an extension of the leat to the new cut of the river at a point close to the bridge in Water Street? But there is nothing obvious to see. This remains an unanswered question. And there is another – at the little aqueduct water level in the leat would have been 4 to 5 feet higher than the river water. Does the river lose that much between the intake, wherever it was, and the little aqueduct? Of course some height could have been be gained by a weir that no longer exists. Incidentally, one reason why the levels seem un-natural in this area is because, I believe, much of the earth from the first, failed, embankment was spread over the land now taken by the memorial garden, the children’s playground, and Palmerston street from the canal aqueduct to Bridgend. This would explain why the river seems to be so low in the ground behind Water Street.

Since I wrote that in 2017, I have seen a map dated around 1900 which shows a watercourse coming from the river behind the cottages in Water Street, up in the corner behind the cottages in Market Place, High Street, and running down almost parallel to Water Street, past the foundry in John Street and back to the river. Unfortunately it doesn’t show whether this watercourse crossed the river at Bridgend or simply joined it. So there is no clarity as to whether this was part of the leat. I mentioned the foundry – this watercourse could have been simply to supply the foundry with cooling water, which discharged it straight back into the river.