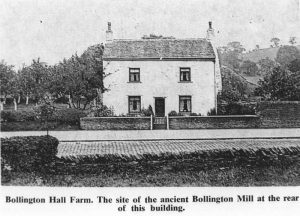 Bollington Hall Farmhouse is number 87 Wellington Road. The first hall was built on this site by Lord Of Bollington, Robert de Leigh, who had been granted the manor by the Black Prince (the son of King Edward III). In 1380 he was awarded the lease of “part of the town of Bollington”, with a water mill there, for twelve years at 8 marks per annum. The oldest part of Bollington Hall Farm was probably built by Robert`s great grandson, Thomas Leigh. The hall was the very centre of ancient Bollington and nearby beside the River Dean was a corn mill. The mill needed to be repaired in 1354, and during a visit from the Prince himself he approved the use of timber from Macclesfield Forest to repair it. This mill was in use until the early 20th century when the leat which powered the mill wheel was blocked and the mill fell into a ruinous state. The Hall and it`s mill are not mentioned again in the records until the 19th century when it was all put up for sale in 1874 and advertised in the Manchester Evening Guardian. It’s exterior is in sandstone, and it has a roof in Kerridge stone-slate with a stone ridge. The house has an L-shaped plan in two storey’s and has a three-bay front. The right hand side of the house has a stepped stone chimney flanked by two-light chamfered rubble mullions.

This building is listed under the Planning (Listed Buildings and Conservation Areas) Act 1990 as amended for it’s special architectural or historic interest.

1821: An old bill was found in the loft of Bollington Hall Farmhouse in the 1970s which was from a linen and woollen drapers in Macclesfield called Hogg and Stark in Market place. This company was dissolved in 1831. The bill dated in January 4th 1821 was for mainly linen and muslin and was addressed to Mr Naylor or Nylor. If this bill was indeed for the occupants of the house then these are the first occupiers of Bollington Hall Farmhouse that we have information on. I have a copy of the bill to follow …

1849: According to the Cheshire Tithe Map, the Hall and surrounding immediate land including an orchard was owned by Castle and Harroway and was occupied by Adam Hatton.

1861:Thomas Halton aged thirty years and his wife Elizabeth who was one year older lived here, both were from Bollington, together with three daughters and two servants. Thomas was a dairy farmer of twenty acres.

1871: Mark Pearson aged thirty one years lived at Bollington Hall, he was listed as a farmer of twenty acres with his wife Sarah who was a year younger and both were from Bollington. They had one daughter Mary who was five years old and a son John aged three years. They also had two servants living with them from Kettleshulme and Derbyshire.

1878: Mark Pearson was still resident but as this is not a census record it only lists himself.

1881: William Challener aged twenty seven and from Bollington, was a farmer with forty acres and now lived at the farm with his wife Margaret aged thirty four years. Margaret was from Woodford. They had two children Marcy five years and Thomas just seven months old. Also staying with them was a sixteen year old servant girl from Adlington, Cheshire.

1891: William Challener still lived At Bollington Hall Farm with his wife Margaret and they had four children. William was still a farmer but was also a ‘Carrier’ (delivery driver today).

1901: William Challener was still a farmer at Bollington Hall Farm and was also a ‘Cab Proprietor’*. His wife Margaret was still with him along with their four children aged from fourteen to twenty years old. One boarder who was an insurance agent from Bollington also lived with them.

1911: William Challener and his wife Mary were still in residence living with two of their grown up children at Bollington Hall Farmhouse. These were Oswald twenty three years old and Hannah or Anna (Barlow) aged twenty eight years and now married. William died the following year aged sixty three.

1921: On the Electoral Roll Allen Cooke was registered as living at Bollington Hall Farmhouse.

On the 1939 register Bollington Hall Farmhouse was occupied by Hannah (or Anna) Aston Barlow nee Challener now fifty seven years old and a dairy farmer seemingly living alone although it says she is married (to Samuel Barlow in 1904 at St Peter’s in Prestbury). It is believed that Hannah’s husband Samuel possibly went to Canada with his brothers shortly after marrying Hannah. He went to seek his fortune but was never heard of again! Hannah died in 1951 leaving £649.10s to William Berry a farm worker! David Houghton told me his Mother and Aunty worked for Anna Barlow delivering milk.

From ? to 1964 Mr and Mrs Williamson leased Bollington Hall Farm.

1964-1971: Val and Jean Heggs leased Bollington Hall Farm from Elliotts Sand & Gravel in Yorkshire. This company possibly owned another farm down the road at Lowerhouse and leased that to the Barber family around the same time. Carol the youngest daughter of Val and Jean lived at Bollington Hall Farm from the age of eleven to eighteen years and she and her siblings Celia and Ian have sent me the photos below. Her parents had a herd of Jersey cows and supplied the local milkman. Jean would spend everyday sterilizing and filling bottles before putting a gold top on them.

The rest went to the Milk Marketing Board. When the land began to get sold off for housing development (mainly the construction of Irwell Rise and then Calder Close at that time) the Heggs’ decided to move on as there were not enough fields left for grazing the dairy cows. Carol has kindly allowed me to use the four photographs below taken between 1964 and 1971.

1971-1976: The house was empty for these years and fell into disrepair. A local builder started to pull the house down at the back and was arrested and jailed for this.

1976: Mr and Mrs Jordan bought the house in a very sorry state. They lived there for over twenty years and completely restored it. There was more paperwork found in the house but this was lent to somebody around 1976 and never returned. I am grateful to Sue Jordan for a great deal of information and photos (see below) on the house. 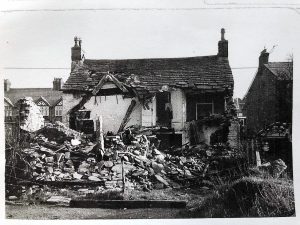 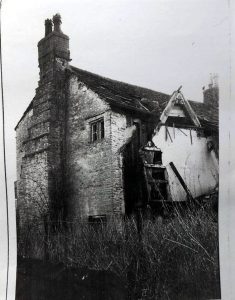 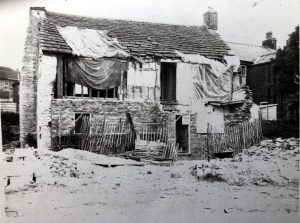 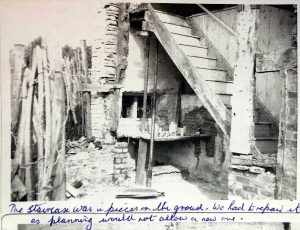 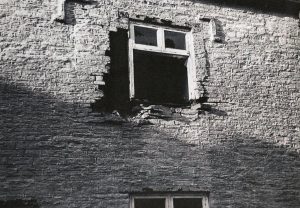 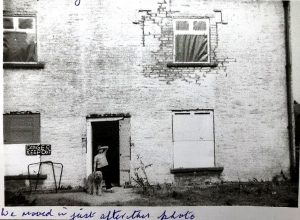 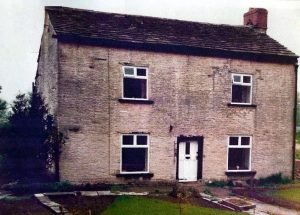 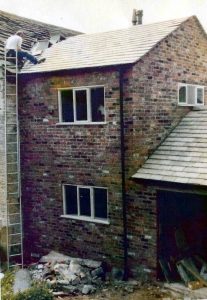 In the late 1800s Bollington Hall Farmhouse was believed to have been used as a funeral parlour. The undertaker was most likely Stanley Howe. William Robinsons was the joiner although Alf Bunting is said to have made the coffins. The timber yard and funeral directors seemed to be at the same yard which was at number two Albert Road and this is also where the horses and hearse were kept. This would have probably been the other side of Albert Road from where there was a rear entrance to Bollington Hall farm buildings. Below is a map from 1897, the red cross is Bollington Hall Farmhouse and the red arrow points to the entrance to the timber yard/funeral directors which is where the first house on the left on Albert road is today. Click on the map to enlarge it. 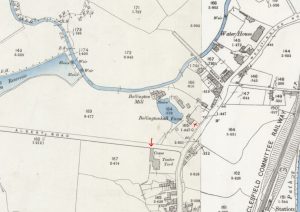 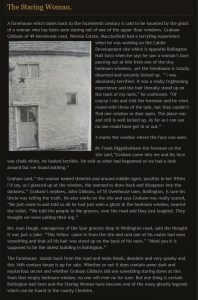 website. Our thanks go to Linda Stewart who has researched census information to present an interesting history of the house’s residents. Acknowledgements go to Dave Houghton, Sue Jordan and Carol Evans (nee Heggs) and her sister Celia and brother Ian for kindly allowing the use of their photos and for the information shared on the history of this ancient house. If it wasn’t for the work of Sue and her husband, this building would quite possibly not be standing today! Thanks also to Mark Steadman for some information on the history of the Hall as featured in Bollington Live magazine.