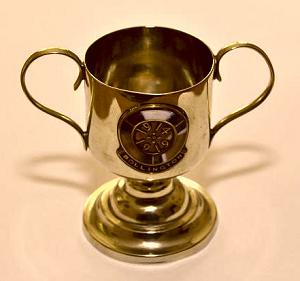 Hundreds of these little goblets (about 4″ / 10cm tall) were commissioned by Bollington Urban District Council after the end of World War I (WWI). 800 were ordered, plus a further order (council notes suggest 100), from a company called Mather Hall, which no longer exists. One goblet was presented to each man from Bollington and Kerridge who fought in and returned from the war. The further order was to enable a goblet to be presented to the relatives of each of the fallen soldiers. This latter appears to have been a supplementary decision from the council at a later date.[1]

There seem to be only a few remaining in existence today. Every now and then a family comes forward having found one in the belongings of a departed loved one.

The lettering on the goblets reads ‘Bollington’ under the shield. Within the circle of the shield are the numbers ‘1914’ and ‘1919’. While the war ended in 1918 non-combat activities continued well into 1919 before soldiers were sent home and demobilised.

The shield surround is segmented with each segment in a different colour.

The goblets were presented on 14th March 1921; all of Bollington’s ex-servicemen were invited to a meeting at the Sunday School (where the library is today) to be presented with his cup. Bollington War Memorial was built and dedicated on 28th November 1920.

There are many unknowns relating to these cups:

If you know the answer to any of these questions, or you have one in your family, please contact the webmaster.