There is a large range of books and booklets about Bollington or those produced for specific events in the town. The following list contains all that I know about but is certainly not complete. If you know of others please send me a message and tell me about them! Thanks. Some are available for sale through the  Discovery Centre  and, in some cases, at newsagents and booksellers.

None of the documents listed below are thought to be in print or available for purchase. Odd copies may appear on eBay

from time to time. Most are kept in public archives where they may be inspected by following the usual procedures.

Many of the booklets were published for Bollington festivals. Consequently, they are not always available for very long afterwards. Some may still exist on the bottom shelves of local newsagents, shops, the Bridgend Centre or on eBay

. Others have been published through the book trade and may be available from bookshops and newsagents. Many are available for reference at Bollington Library.

An ongoing chronicle of Bollington life can be found in Bollington Live! which is published three times each year and has been so since 1994. It is delivered free to every household throughout Bollington, Kerridge, Pott Shrigley and Whiteley Green. Reference copies are available at the Library or you can read it online.

Then there are publications that are really about other subjects than Bollington but which contain significant references to the town or the immediate area.

Guide to the Macclesfield & Upper Peak Forest Canals, Tim Boddington and The Macclesfield Canal Society. 3rd edition published May 2002 but now out of print and hard to find.

The Letters of Mrs. Gaskell, editors Arthur Pollard, J. A. V. Chapple. Please note – The Mrs Elizabeth Gaskell of letters fame is not one of the Mrs Gaskells that lived at Ingersley Hall in Bollington! However, Elizabeth Gaskell did regularly visit her friends the Samuel Gregs in Bollington and two of her books, Mary Barton and North & South, were modelled on her observations of industrial power between Samuel and other Gregs and the workers at Lowerhouse Mill, Bollington.

The Shrigley Abduction, Abby Ashby & Audrey Jones, 2003. A true story about the daughter of the Turner family who lived at Shrigley Hall in the early 19thC. Not quite Bollington but an excellent local social history recording a remarkable and infamous incident. This book is available from the  Discovery Centre . 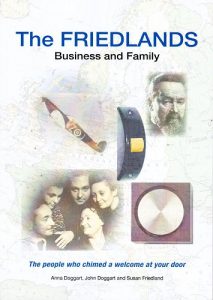 The FRIEDLANDS Business and Family, Anna Doggart, John Doggart and Susan Friedland, 2018. The story of a manufacturer that was critical to the war effort (WWII 1939-45) and, when at risk from the London blitz, moved to Lowerhouse mill in Bollington. Available in book shops.

Pott Shrigley, A Village School, the story of 500 years of education, Emily White, 1992.

Pott Shrigley, The Story of a village school, Tom Askey, 1968.

Gone to Pott, Derrick Brooke, The Book Guild Ltd., 2001. ISBN 1 85776 561 3. “As well as being a fascinating account of the trials and tribulations faced by Pott Shrigley Cricket Club since its formation in 1919, Gone to Pott also offers a unique portrait of rural village life.”

The following well illustrated book collects together pictures and history of many places in east Cheshire, containing just two pages on Bollington:

These histories contain some reference to the town or its immediate area. Several of these are taken from the references in Bollington Through the Centuries:

A Description of the Country Round Manchester, Dr. Aikin.

Contributions to the History of the Ancient Parish of Prestbury, Dr. Reynaud.

East Cheshire: past and present, or, A history of the hundred of Macclesfield, in the county palatine of Chester from original records, Dr. John Parsons Earwaker, 1877. (Usually referred to as History of East Cheshire.)

Roman remains in the eastern part of Cheshire, Dr. John Parsons Earwaker, 1877. (Not confirmed but likely to include the Bollington area.)

There are also regular items about the town in Cheshire Life including:

“Goodbye to the Flicks”, Roy Arnold, September 1980, page 70 which refers to the Bollington Empire in Palmerston Street (Hailwood House now stands on the site of this).

The following publications are both very old and no longer in publication. The items are taken from the ‘Books consulted’ list in Portrait of a Village: The Happy Valley.

A Layman’s Legacy, tribute to Samuel Greg, 1883, written by his wife Mary and their daughter, Amy.

Distaff; Jubilee Distaff, Fine Spinners & Doublers Limited. An incomplete set of these has been generously donated to the Civic Society collection. Each copy, there are 32 in the set, contains up to two pages of Bollington stories.

There is one item that has, so far as is known, never been published in book form.

Thomas Oliver & Sons (Bollington) Ltd. Notes on the History of the Firm during 150 years, Revd. A. C. Oliver, February 1940. Olivers occupied Waterhouse Mill. Only one copy of this hand-written history is known to exist and that is now in the Civic Society collection. It is very hard to read but has been deciphered and typed up by willing volunteers. It is published on this web site with the history of Waterhouse mill.

Finally, there are the historical references, items that will interest the serious historian. These may not always contain reference to Bollington but may give information about the area in which the town is situated, or perhaps something about a particular time in this part of the country, giving background as to why the town has developed the way it has. I am indebted to George Longden for this masterful list. A few items have subsequently been added to his list as they have been discovered or come to hand. The list is in alphabetical order.

A HISTORY OF CHESHIRE, Alan Crosby, 1996

A HISTORY OF THE CHESHIRE COUNTY UNION OF CONGREGATIONAL CHURCHES, Thomas Griffiths & Co, Manchester, 1907. Congregationalism in Bollington is covered on pages 173-177

A SHORT HISTORY AND DESCRIPTION OF THE BOLLINGTON WATERWORKS, S. Knight, 1923

ACT OF PARLIAMENT, AMENDMENT TO WILL OF PHILIP ANTROBUS DECEASED, 1832

ALFRED GATLEY’S DIARY AND LETTERBOOKS, from a transcript formerly in the possession of Mrs. Rathbone, Bollington Cross

ANTIQUITIES OF LYME, Marriott, 1810 (a little about the beacon that preceded White Nancy)

BEHIND THE DISTAFF, Fine Spinners and Doublers Limited, 1946

BUILDINGS OF ARCHITECTURAL AND HISTORICAL INTEREST, Dept of Environment, HMSO 1983

GENERAL VIEW OF THE AGRICULTURE OF CHESHIRE, Henry Holland, 1808

GEOLOGY OF THE COUNTRY AROUND MACCLESFIELD, CONGLETON, CREWE, AND MIDDLEWICH, T. I. Pocock, Memoirs of the Geological Survey of Great Britain, 1906

GEOLOGY OF THE COUNTRY AROUND MACCLESFIELD, CONGLETON, CREWE AND MIDDLEWICH, W. B. Evans. A. A. Wilson, B. J. Taylor, & D. Price, Memoirs of the Geological Survey of Great Britain, 1968

GEOLOGY OF THE COUNTRY AROUND STOCKPORT, MACCLESFIELD, CONGLETON AND LEEK, E. Hull & A. H. Green, Memoirs of the Geological Survey of Great Britain, 1866

GEOLOGY OF THE COUNTRY AROUND STOCKPORT AND KNUTSFORD, B. J. Taylor, R. H. Price, & F. M. Trotter, Memoirs of the Geological Survey of Great Britain, 1963

HISTORY OF OLD MACCLESFIELD, John Earles, one of series of articles in Macclesfield Courier, 31 March 1917

MACCLESFIELD IN THE LATER FOURTEENTH CENTURY, A. M. Tonkinson, 1999

MEMOIR OF THE LATE JAMES MELLOR, 1891

PLAN OF MACCLESFIELD CANAL, 40 INCHES TO THE MILE, 1890s, copy with the Macclesfield Canal Society

PROPOSED NEW ROAD FROM BOLLINGTON TO RAINOW, copy of part of a plan, nd, in the hands of the writer, George Longden

PUBLIC ENQUIRY INTO REFUSAL OF PERMISSION TO ERECT A FACTORY, JACKSON LANE, KERRIDGE, 10 February 1954, transcript of proceedings, and submissions, in the archive of Bollington Town Council

RAINOW IN THE OLDEN TIME, Walter Smith, 61 articles in the Macclesfield Courier, from March 1932

SALTWAYS FROM THE CHESHIRE WICHES, W. B. Crump, Transactions of the Lancashire and Cheshire Antiquarian Society, vol 54, 1940

SURVEY OF SOME OF THE LANDS IN BOLINGTON BELONGING TO EDWARD DOUNES, 1686, Downes Papers, Cheshire Record Office

THE DEVELOPMENT OF THE TURNPIKE SYSTEM IN LANCASHIRE AND CHESHIRE, William Harrison, Transactions of the Lancashire and Cheshire Antiquarian Society, vol 4, 1886

THE LAND WE LIVE IN: …, vol I, The Midland Counties …, un-named authors, published by William S. Orr & Co., London, no publication date given but probably c.1860 (pages 239-249 relate to Macclesfield and district.)

THE HISTORY OF THE COUNTY PALATINE AND CITY OF CHESTER, George Ormerod, 1819, reprinted with additions by Thomas Helsby, 1882

THE HISTORY OF THE COUNTY PALATINE AND DUCHY OF LANCASTER, Edward Baines, new edition revised by James Croston, 1888-1893, vol 3

THE MINISTRY OF YOUTH. THE WORK OF SAVIO HOUSE, Bollington Live! March 2001

THE PLACE NAMES OF RAINOW, Jane Laughton, articles in Contact, the Parish Magazine of Rainow with Saltersford and Forest, Jan 2000 – May 2001

THE REGISTER BOOK OF CHRISTENINGS, WEDDINGS, AND BURIALS WITHIN THE PARISH OF PRESTBURY … 1560-1636, James Croston (ed.), Record Society, 1881

THE STORY OF THE CHURCH IN RAINOW, Mary Meacham, 1996

THE WATERLOO JOURNAL, Vol.41 No.3 Autumn 2019, Ian Walker, article about James Robertshaw (1793-1859) a Bollington resident who fought at Waterloo

TOWNSHIP PACK NO. 20 BOLLINGTON, prepared an published by Cheshire Libraries, Arts & Archives, undated but after 1986

VAREY’S HISTORY AND DIRECTORY OF MACCLESFIELD AND VICINITY, 1825

There are, no doubt, a number of books by Bollington authors (other than those about Bollington noted above). I am aware of the following:

History of Good Dog Fanny and Tuft, the Canary. With other Stories, all True, published with a coloured frontispiece in London, Edinburgh and New York by T. Nelson and Sons in 1881, by Mrs Margaret E. Gaskell, aged 67. This is NOT the Mrs Gaskell of letters fame (that was Elizabeth C. Gaskell), but the lady of Ingersley Hall, now Savio House. I am grateful to John A. V. Chapple, Editor of noted books about Mrs Elizabeth Gaskell’s letters, for bringing this book and confusion to my notice. Not now available online.

Scenes From the Life of Jesus, Samuel Greg, 1869, available on Google Books

. A delightful and very readable interpretation of Bible stories.

. A Layman’s Legacy is a tribute written by Samuel Greg’s widow, Mary and his daughter, Amy.

Two letters to Leonard Horner, Esq., on the capabilities of the factory system, Samuel Greg, 1840.

Doctor Chekhov, A Study in Literature and Medicine, Dr. John Coope MBE, 1997. Dr. Coope was Bollington’s leading GP for very many years during the second half of the 20thC. I believe he saw many parallels, such as medical research and practice, literature, and music, between himself and Chekhov which led to him studying and writing about Chekhov.

The Menopause: A Practical Guide to Understanding and Coping with the Change, Dr. Jean Coope, Paperback, 1995. Wife of Dr John Coope, they were both very notable in their fields.

Travels with a Primate, Terry Waite, published 21 February 2018. The Primate in the title was Dr Runcie, Archbishop of Canterbury. Terry Waite was born in Bollington and lived here for just a few weeks before his father, a policeman, was posted to Styal.

The Girl in the White Dress, Paul Barrell, published February 2020. A mystery thriller.