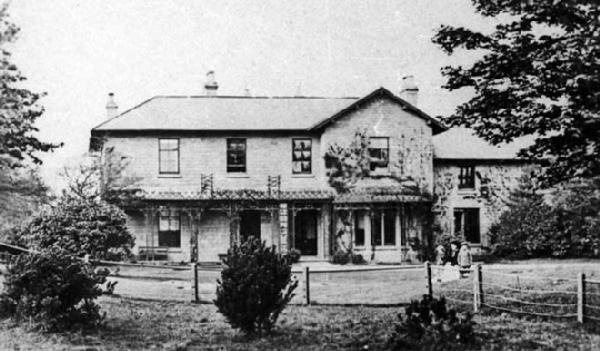 This fine country house was built by Philip Antrobus and passed on to Samuel Greg. Although some historic records say Samuel Greg built it.

It was once called Gregs Hall in the 1851 census.

During the 19th century the house was known simply as Mount. It is uncertain when it became The Mount, although that is the name given by Herbert Greg in a letter (below), written on 20th January 1900 just as he was inheriting the estate from his niece Amy Greg. ‘Mr Turner’ was Mr Isaac Turner, the head gardener. His grand-daughter the late Mary Houghton lived in Bollington Cross, and we are indebted to her for providing the letter below. 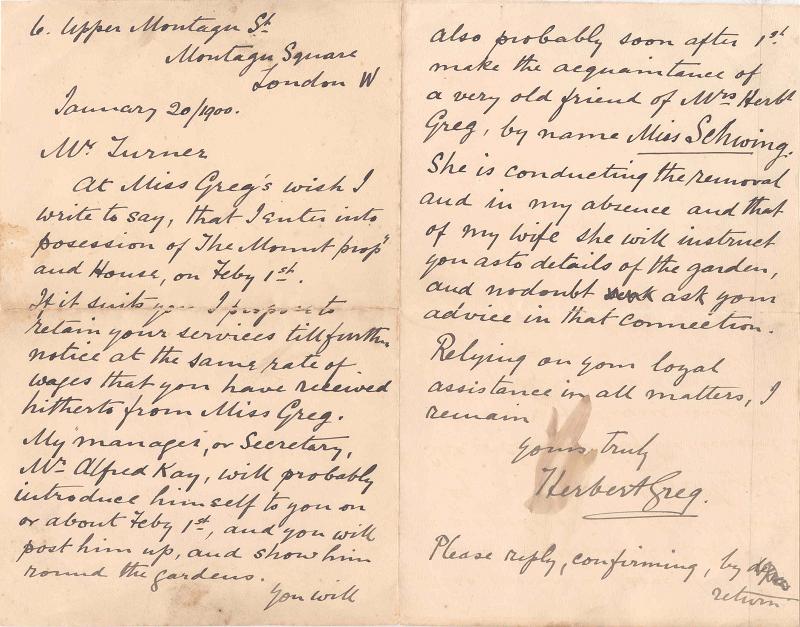 1841: Thomas Henshall lived at The Mount with his wife Ann, they were both aged forty years and Thomas was a farmer. There is a question mark on this because Mount was apparently not built until 1845/6.

1861: The census says Samuel Greg lived at Mount when he was aged fifty nine years. Originally from Wilmslow Samuel is described as a Magistrate and land proprietor. His wife Mary aged fifty one years was from Nottingham. They had three daughters and one son age ranges ten to eighteen years, they were all born in Bollington. There were also two servants. Ten years earlier the family lived at Gregs Place, Bench Lane (Flash Lane) so this is probably the Mount. Twenty nine years previously they lived at Heath Farm which would probably be part of Turner Heath House. They had a one year old child.

Also in 1861 was a separate list on the census for Agnes Greg below. Apparently Mount was two households from at least 1851.

1861: Agnes Greg was listed on the Census as living at Mount House which is almost the same title as Samuel`s house. She was Samuel`s sister and was sixty four years old and described as a `Shareholder`. She lived with three servants and had two visitors on this day including her brother John Greg.

1871: Samuel Greg was sixty six (he has lost three years!). He was still a Magistrate and a landowner. His wife Mary was sixty one years old. Two daughters and a son still lived with them, age range twenty to thirty one years. The youngest being the son, and he was a Clerk to a solicitor at this time.

1871: Again Agnes Greg follows on down the page on the census with the same named house. She had seven servants and one visitor on this census day.

1881: Agnes Greg aged eighty five years was still at Mount with her family and servants. She died a spinster in 1884 and left £25,358 in her Will, a colossal amount then!

1881: On the same census page again was Mary Greg, now a widow, and her family and servants.

1891: Mary Greg, wife of Samuel still lived at The Mount. She was eighty one years old. She lived with her three spinster daughters aged between forty one and fifty one years, and four servants. Also two Daughters in Law, Gertrude Greg and Alice Dowson, and a grandson Gerard Dowson aged sixteen years.

1892: Kelly`s Directory just lists a Miss Greg living at the Mount. But it is not clear which daughter this was of the three, or possibly the Daughter in Law Gertrude, but most probably the spinster daughter Amy Greg who died there in c.1900.

1896: Kelly`s Directory has Herbert Greg registered as living at The Mount.

1901: Herbert Greg was still living at The Mount, he was fifty fours years of age, was born in Macclesfield and was a stock broker agent. His wife Gertrude was forty five years old and from Bolton. They had two children, Osbert Manning Greg aged nine years and  Agnes Needham Greg aged seven years, they were both born in Bolton. They had a German governess and six servants.

1911: Bolton born Gertrude Greg is now head of The Mount at he age of forty five years. She was listed as being married, but her husband was not home on this day. She still had one son living at home, Osbert aged nineteen years. There were also five servants and one visitor.

1914: Herbert Greg is listed at The Mount in the Kelly`s Directory.

Isaac Turner’s gardens at The Mount below as painted by Amy Greg in about 1898. 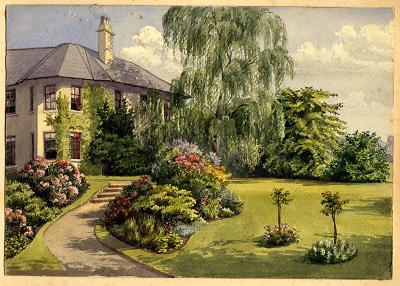 In 1926 Mrs Victoria Hammond lived at The Mount.

In the 1930s and 40`s The Mount was occupied by Miles Kenneth Burrows who was born in 1888. Deputy Chairman, Managing Director and Secretary of Manchester Collieries Limited

Miles was also President of the Lancashire & Cheshire Coal Association. Also living at The Mount was Walter Burrows, born in 1886 and listed in the 1939 census as a Regional Director Staff. Another member of the family, Sir Robert Burrows, lived nearby at Bonis Hall.

Today The Mount is a retirement care home- The Mount Care Home.

In the years from 2003 Pam & Tony Lawton worked very hard to restore various parts of the garden to the way they were before nature and a lack of care produced an overgrowth of foliage. They have opened up many of the features of this delightful garden.