This listed house was rebuilt in about 1780 by Philip Antrobus. See the Antrobus family .It is constructed in brick, and has a Kerridge stone-slate roof with a stone ridge. The rear wall is in sandstone. The house is in three stories, and has a three-bay front. At the top of the building is a fluted frieze under a projecting cornice. The doorway is flanked by ionic columns, and the windows are sashes[1].

Turner Heath is next door to Rookery, this is where George Antrobus lived while he developed various mills in Bollington. When George was seventeen years old he purchased some houses called the `Poor Houses` and weaving on hand looms was probably carried out in them. 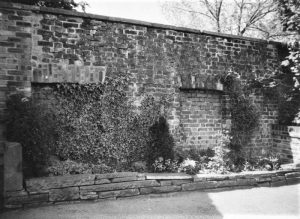 A part of these houses now form the garden wall at Turner Heath (photo left). When Philip Antrobus junior died in 1829 he left a small works at Turner Heath consisting of a warehouse, dye house, weaving shop, and steam engine.

Samuel Greg, of Lowerhouse Mill, came to live at Turner Heath in 1832. He established the first Sunday School in an out-building and gave land for Bollington Cross school. He was a bachelor aged twenty eight years and had moved to Bollington to take over Lowerhouse Mill. He leased it from executors Messrs. Antrobus from 1832 to 1846. He then bought the mill. Meanwhile he married Mary Priscilla Needham of Lawton, Nottingham in 1838. Mary was the cousin of Samuel`s sister in law Mary Philips who was wife of his eldest brother Robert Hyde Greg, keep up! Samuel and Mary had eight children, six girls and two boys. Four of the girls were born at Turner Heath (including Amy Greg), and one son was also born there. The rest were born at The Mount after the family moved there in 1846.

The Tithe map of 1849 lists the occupier as Peter W. Dumville.

and his family were living at Turner Heath House at the time of this Census having been at Black Road, Macclesfield, in 1841. Thomas was a originally from Disley and was described as an agricultural labourer aged forty one years. This was not his occupation ten years previously but it is too difficult to read exactly what he did in 1841. His wife, Sarah Fearns

from Disley, was aged thirty five years. They had five children living with them at this time. The eldest child James was already a silk weaver at the age of twelve years. His brother Edward was eight years old. The third child was Mary, she was six years old. And the two youngest girls were Martha and Harriet Ann (photo below left) aged three years, and aged ten months respectively. Harriet was the only child born at Turner Heath House, the other four were born at Pott Shrigley. Later in 1851 the family emigrated to New Zealand on the ship Labuan and went on to have a further three children in Christchurch, New Zealand between 1852 and 1858.

1896: Listed as living at Turner Heath in the electoral roll this year was John Eardley, he  was a farmer.

1901: William Bradley aged forty eight years a calico printer from Bollington lived at Turner Heath House with his wife Isabella Ann aged forty nine years and from Liverpool. They had four daughters between fourteen and twenty nine years, all were cotton weavers. Also on this census, on the very next page is another Turner Heath listing on the same road. Presumably one of them is Turner Heath Mill now named Heath House, but it is not clear which is which. The occupiers of the second house were Harry Chadwick aged twenty nine years, a cotton weaver from Bollington, his wife Emily aged twenty eight also from Bollington and Arthur their one year old son. Also living there was Emily`s Mother and Brother Jane Stringer aged fifty seven years and Arthur James Stringer a blacksmith aged twenty six and from Bollington.

1911: John Arthur Wanklyn was residing at Turner Heath on this census. He was originally born in Buenos Ares, Argentina, hence the surname. He was forty two years old and was the manager of a cotton spinning mill. His wife Grace was from Hertfordshire and was thirty eight years of age. They had four daughters at this point. Christina Riestra aged ten, Frances Mary aged seven, Harriet Grace aged five and Edith Jean aged three years. All bar Christina were born in Bollington. Christina was born in Hazel Grove, Stockport. There were five servants/domestics/nurses, all female, so John Arthur was the only male in the household with ten females.

In the 1914 Kelly`s Directory Isaac Needham is registered as living at Turner Heath.

In 1934 William Taylor Jones was living at Turner heath according to the Electoral Roll, as was Jane Stringer.

1979: Dr David Fawkner Corbett (originally a doctor at South Park Surgery in Macclesfield and now living in Kent) and his wife Marion used to live at Turner Heath House and have allowed me to share the information he sent me as follows …

“We lived there from 1979 to 1993. The high wall at the front had two old door entrances in the base. This wall collapsed whilst we lived there and was rebuilt. There was a pond with stone walls and steps down into it some 20 feet inside the wall which never flooded and never dried out. We presumed this was fed by a spring and used in the mill. On the mill end of the house (seen in the loft of the massive drawing room, which itself was built in ?1904) there was marking from the ridge of an old building. From this evidence it appeared that Turner Heath mill was right next to Turner Heath. The name Heath House was used for the other half when Turner Heath was divided into two properties. Dr Jean and Dr John Coope MBE brought up their family at Turner Heath and held surgeries in the house to serve Bollington Cross patients. One of Samuel Greg’s children had scratched their name on a window pain of the first floor loo”.

Thank you also to Richard Brimelow for putting Dr Fawkner Corbett in touch with me (Linda).

Our thanks go to Linda Stewart who has researched census information to present an interesting history of the house’s residents. Acknowledgements also to Jo-Anna Cousineau who provided information on the Gaskell family and the photo of her Great Great Grandparents Harriet Ann and James Colven Anderson in New Zealand.