Rookery is a fine house on Bollington Road, the last on the right going towards Macclesfield. It has been re-furbished and divided into six units in 2004-06.

The house was probably built by the Antrobus family who built several of the early mills in Bollington including Lowerhouse in 1818. In 1832 we believe the house to have been rented by William Crosley the engineer and builder of the Macclesfield Canal  which was

then being completed. See Philip Antrobus and his Will. His wife Mary Antrobus made a Will in 1845 (click on image on right to enlarge).

At that time (1830`s) the house was smaller, extending (see picture above left) from the right side as far as the gutter down pipe to the left of centre. The extension having been added at a later date.

1851: Peter Brooke a Cotton Merchant aged seventy years had retired to the house, seemingly a widower and having two servants to attend him.

1861: Peter Brooke is still living at Rookery at this time but now with his niece Mary E Antrobus (mentioned in Mary`s Will on the right) aged thirty five years and three servants. In 1861 Peter Brooke bequeathed by will £270, the interest to be given annually on Christmas day to the poor inhabitants of the townships of Prestbury and Butley, a preference being given to widows. He also left interest of £90 to the Bollington Cross Sunday School.

1871:Thomas Antrobus aged fifty years was resident at Rookery at this time. He was a County Magistrate. Thomas is mentioned in Mary`s Will above right. He lived with his housekeeper Harriet Edwards aged thirty four years and from Shropshire, Elizabeth Cooper a forty year old house maid from Macclesfield, and finally a house boy named William Clarke who was seventeen years old and from Congleton.

1881: There is no head of household at home this year but three ‘daughters’ were listed as living at Rookery, they were Eliza, Alice and Emily Ashworth, all unmarried and aged forty, thirty seven and thirty two years respectively. However, there is also a grandson aged six years named Edward Morris with his governess Sophia Crofts aged thirty three years. They seem to have come from abroad but this information has been scribbled out on the census form, but still readable are the words `Portugal` and `British Subject`. There were also three servants living with them including a coachman and a visitor from Stalybridge named George H Benson aged thirty eight years who`s occupation is unreadable.

1891: Hercules Campbell Yates was resident at this time. He was thirty nine years old and was a Coroner and Registrar of County Court originating from Sandbach, Cheshire. His wife Mary was thirty six years old and was born in Stourbridge. They had four sons and one daughter aged between one and seven years. Two Nurse/ Domestic servants from Worcestershire and Lincolnshire and two further servants were also resident.

1901: Hercules and his family were still at Rookery, they had an extra child by this time, a daughter Marjory Hylda Gladys aged eight years as well as their five children listed on the previous census. They had two servants both were from Crewe and both nineteen years old.

1911 and 1915 records show that the owner of The Rookery was Reginald Lawrence Antrobus of the Antrobus family who lived at Cranley Gardens in London.

1911: James Perry aged thirty six years is listed as living at The Rookery with his wife Martha Annie aged thirty eight years. James was a coachman at this time. They had two children Joseph Birber aged sixteen years and his sister Evaline aged thirteen years. Joseph was an assistant gardener. However, in the book Bollington 1911, it is stated that Rookery was empty this year as the Yates family had moved to Tytherington in 1910. As James Perry was a coachman perhaps he lived in a separate servants quarters in the grounds.

1924: William Charles Jones and his wife Edith Nora lived at The Rookery in this year.

1931: Charles Fingland and his wife Annie were living at The Rookery at this time along with Winifred and Edith Helen Clowes.

1939: Francis H Mainprice (1892-1967) aged forty six years was resident at The Rookery, he was a Solicitor. His wife Edith A (Tonge) lived with him and was also forty six years old. They had two servants at this time. Francis came from quite a well to do family in Altrincham. His father William Samuel Mainprice was a Raw Silk Importer who employed several people, as was Francis’s brother Christopher. His other brother William was also a solicitor. So they were a well educated family. Also living at The Rookery was Annie Oliver a seventy year old widow and her son William aged thirty five years who was a farm labourer. There was a servant named Florence M Fisher aged twenty three years , a cook named Lily Gill aged fifty two years and a twenty year old waitress Doris Lockitt. Finally Gordon Tomlinson an eighteen year old clerk to an accountants was also living at The Rookery.

Harold Barlow of Greg`s Cottages in Lowerhouse looked after The Rookery`s garden for almost forty years. 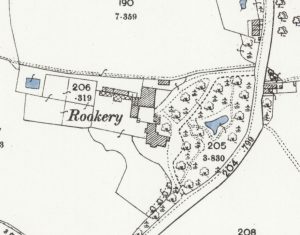 My thanks go to those who researched and discovered the history that is presented in these pages. Please read the full acknowledgement of their remarkable achievement.

Please don’t chuck out those historic documents and pictures! Find out why here.