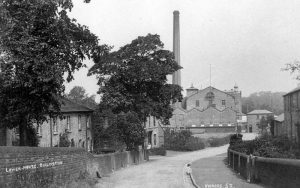 This delightful community was almost entirely the creation of Samuel Greg (son of Samuel Greg from Styal Mill) who bought Lowerhouse mill and 53 of the houses and cottages for his workers from the estate of their builder, Philip Antrobus. Greg took the physical hamlet together with its people and established a model paternalistic industrial community with a school, library, land for allotments and the encouragement for the residents to better themselves in body and mind by self sufficiency in food and opportunity for learning.

Many of the buildings are notable, dating from early 19thC. In particular Lowerhouse mill, Long Row, a terrace of 19 stone cottages, the houses at the very end of Mill Lane with their unusually long overhangs at the eaves, and the library and school in Moss Lane.

Moss Brow is one of the original lanes in the area, originally known as Hall Lane, remaining unchanged except for its metalled surface perhaps for centuries, and leading up to Bollington Cross.

The land to left and right of the road to the Cheshire East Council recycling centre used to be Green Belt, but in spite of considerable opposition was re-zoned for industrial development that, in the event of the 2008 financial crisis, was never built. In January 2015 the site to the west of the road was further re-zoned for housing and approval given for the construction of 33 units. These have been built in 2018/19 and is known as Dean Bank Close and Lowerhouse Green. Approval has also been given to build c.37 units on the east side of the road. All of this land has a history of flooding. For much more on these developments and our opposition to them can be found on another page, please click here.

The area of land between Lowerhouse and Hall Hill, known as Hall Hill fields, is also the subject of concern for future development.