Dyers Close (off Ingersley Vale), previously known as Higher Mills, was once the site of Bollington’s biggest brewery, operated firstly by Parrott & Horsfield, licensed brewers, from about 1874. John Horsfield, licensee of the Park Tavern in Macclesfield (owned today by Bollington Brewing Co.!) – see glass door panel below right – joined Thomas Parrott in partnership to establish the firm of Parrott & Horsfield.[1] 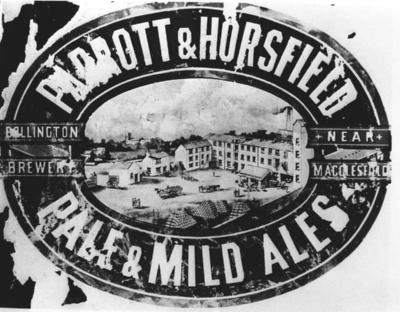 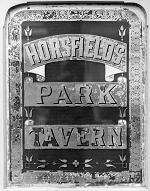 The picture (left) appears to be of an enamel advertising sign. The picture of the brewery is slightly stylised, for instance it doesn’t show the hills up the valley.

John Horsfield was one of the longest serving licensees in Macclesfield. He had seven sons and one daughter, Sarah Jane. She was tragically killed when her trap overturned on Chestergate in Macclesfield on 16th February 1892. She was just 27 years old. 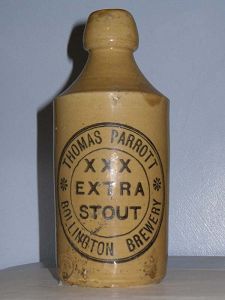 John outlived his wife and five of his sons. His eldest son Walter took over the pub and continued to run it until 1902. Another son, Arthur, had emigrated to Australia some years before John’s death. He ran the Kent Brewery

in Sydney. In the latter 20thC this brewery brewed an ale called Dinner Ale. Today Dinner Ale is brewed by the Bollington Brewing Co and is available at the Vale Inn. Lee Wainwright, the proprietor of both the Vale and Bollington Brewery, has also, coincidentally, taken over the same Park Tavern to provide an outlet for his beers. What goes around comes around – even if it did take a century and a half!

Many thanks to Frank Pegg for the picture of the Thomas Parrott stone beer bottle. 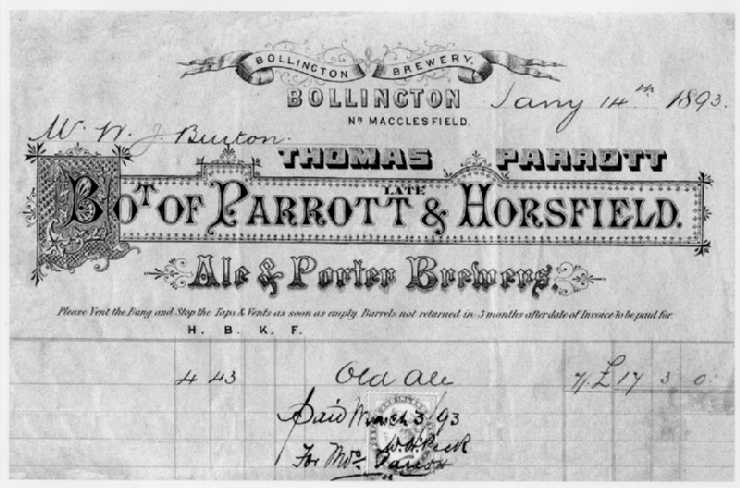 The billhead (above) was originally printed for Parrott & Horsfield. However, as Horsfield had left the business by 1891, Parrott had his stationery overprinted with ‘Thomas Parrott’ and ‘Late’ to avoid the cost of having a new set printed.

The picture below, very kindly supplied by Paul Wreglesworth, shows two Parrott stone bottles and a similar Heaver Brothers bottle, all in first class condition (the bottles not the beer!). Many brewers made Extra Stout and many bottles such as these survive. However, the Stone Ale bottle is a rarity. Heavers are described in the next section below. 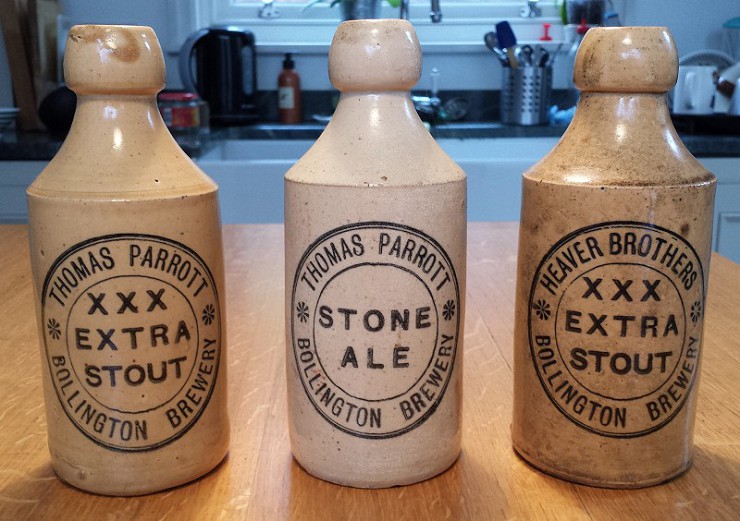 The Higher Mills brewery was acquired by Heaver Brothers in 1893, or very shortly afterwards, who operated from the Bollington site until the 1930s. In 1920 it became a bottling plant for Ind Coope products, the Burton-on-Trent brewer. It was lost in a disastrous fire on 3rd March 1931 when 36,000 bottles were destroyed.[2] The fine example of a bottle (right – click it for a bigger image) is possibly as early as 1910 and has the impression Heaver Bros Brewers Bollington. We also have another of these bottles but with the word ‘Limited’ added in the space below ‘Heaver Bros’. See also the Heaver Brothers stone bottle in the picture above which carried XXX Extra Stout. It is interesting to note that this product is not included in the price list shown below.

Brewing again in the 21st Century!

In July 2008 beer was once again being brewed in Bollington, this time by Lee Wainwright, the licensee of the Vale Inn, Adlington Road, operating under the name Bollington Brewing Company

. Lee had occasionally considered brewing then one day at a publican’s event in Suffolk he chanced to hear of a micro brewery that wished to dispose of its brewing equipment. A deal was done and the plant duly moved to Bollington.

The first brew was tasted at the Vale Inn on Thursday 24th July 2008 with the first retail pint going to Rob Nicholson, a local CAMRA representative. The first brew was called just that – First Brew – and a very good pint it was to! Light in colour, slightly hoppy with an excellent flavour – my idea of the perfect pint. I only hope Lee can produce the same again, and again, and again! He does, today it’s called Bollington Best!

The second brew was a Porter – Bollington Nights is black with a fine head, very tasty. Several others have followed. They have since won numerous brewing awards. Call in and try a couple or three. See the brewery web site

is already history, ceasing production in early 2018. This was very much a micro brewery, being located in a small unit in the heart of Bollington. However, David Hughes previously had 20 years experience creating the golden nectar so this was a good product from day one. The brews were regularly on the bar at the Poachers Inn, and very popular. Over the years David won many awards for his outstanding brews.

The brew kit and the recipes were sold to new owners, Junction Leisure Ltd., who are operating it from their public house, The Ox‑fford in Oxford Road, Macclesfield. They also owned the now closed Crown Inn, in Church Street, Bollington.

Clicking the reference description below takes you back to the text above.

I am most grateful to those who have provided additional information on the old pubs and breweries of Bollington, and particularly to Paul Wreglesworth. These pages have become a very interesting collection of pub and brewery heritage as a result.

I am very much indebted to Paul Wreglesworth, noted for his research and books on the Pubs & Breweries of Macclesfield, for providing corrections and further information about the brewery at Higher Mills, the Heaver family and on Parrott & Horsfield.

Please let me know of any other old pubs and breweries of Bollington or anything else you know about those already listed – please send me a message!