1896/1911: George Heaver aged forty one years in 1911 was living at Jevington with his wife Nellie aged thirty seven years. Both were born in Sussex. George was the manager of the Heaver’s Brewery at Higher mills, Church Street. They had one son Stanley aged thirteen years. Also there was a sister in law, Mabel aged twenty six from Sussex. They had one servant living with them named Alma Karn, she was twenty six years old and was born in Prussia. It is believed that George Heaver built Jevington.

William Hammond bought Jevington prior to 1918. The Hammond’s were brick makers at Pott Shrigley. The house was expanded to include a glass sided bedroom (see first picture below) for young Eric Hammond who suffered in childhood from extreme asthma. They lived in Jevington until about 1963 when Lillian Hammond died and Jevington had to be sold to pay death duties. 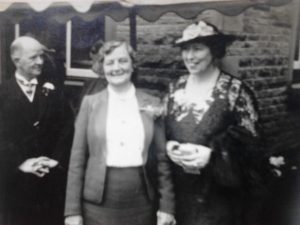 Above Mr and Mrs Hammond at a Wedding at Jevington. Cissy Cumberbirch from across the road at Greenfields House is in the middle.

In the 1960s the Black family lived at Jevington. They had a gentleman’s outfitters in the Market Place in Macclesfield.

The Nevitt family lived at Jevington from about 1966 to 1972. They had a shop on Church Street in Macclesfield selling electric lighting.

In the 1970s and early 1980s the Cannell family moved up from London to live at Jevington. Ken Cannell had been part of a huge transfer of staff going north from Barclays Bank in London. There were four Cannell children David, Penelope, Lucy and Victoria. The house inside was very old fashioned in decor at this time with flock wallpaper everywhere, and lovely ceiling roses in a lot of rooms. An enormous solid fuel Aga provided hot water and cooking facilities and probably heating. The house was known for it’s many parties whilst owned by the Cannells. It was also the base for the local branch of the Labour party for a short time. The Cannells lived at Jevington for about six years. It then stood empty for about two years before being bought by Janet Sharrocks.

C.1984 Janet Sharrocks and a partner converted Jevington into a residential home. Most residents and staff were from Bollington. There were between six and ten residents. It continued as a residential home until shortly before the fire in 2015.