Like everywhere else, Bollington and district suffered great losses from its community, particularly in WWI, but also in WWII. Like many other places, Bollington and Kerridge erected stone war memorials, and in Bollington’s case, within a sizable memorial garden, in order to provide that important focus for remembrance throughout the year but especially on Remembrance Sunday each November. 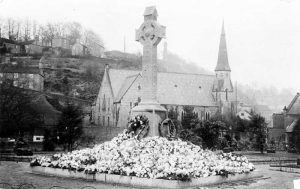 Bollington‘s memorial was installed in a newly constructed garden in 1920 and dedicated on 28th November 1920, shortly after the second anniversary of the Armistice. The losses of war were still very raw, and one may imagine that there was a very large turnout for the ceremony. While there has always been a respectable turnout throughout the years, since 2014 through the centenary years marking WWI, the assembled crowd has increased very significantly to well over 1,000 each year. It is particularly sad that in the anniversary year of 2020, the Covid-19 pandemic and the necessary restrictions on public assembly, we were unable to gather once again to remember and to celebrate the 100th anniversary of the memorial. It’s worth recalling that in 1920 there was also a pandemic – the Spanish Flu – so it is possible that folk were also then reluctant to gather together. 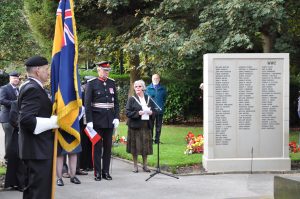 When originally built the names of all those lost in WWI were inscribed on the base of the cross. Of course, they didn’t know that only twenty years later a further conflict would lead to further losses and a need to add names to the memorial. However, these names were added but in a rather haphazard way. It also became apparent, as more research was carried out, that a number of names were missing. In 2015 it was recognised that these additional names could not be satisfactorily added to the stone, and so it was decided to build two new pillars facing the cross and inscribe the names of all those Bollington and Kerridge men (they were all men) who gave their lives in the service of the nation upon them. These were dedicated in a full ceremony on 11th October 2015.

Video of the parade following the 2018 Remembrance Service (YouTube) 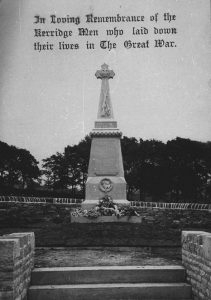 Kerridge built their own memorial and inaugurated it on 28th September 1919. It stands in a small beautifully kept garden on Oak Lane at its junction with the Rally Road. Kerridge hold their Remembrance parade and service on the second Sunday in July each year.

The Kerridge memorial, a stone cross mounted on a plinth, was made by local stone mason Joseph James Broster using the notable Kerridge stone from the local quarries. Bollington wanted to do the same, it is said, but found it too expensive to carve! They used a much softer red sandstone from down in the Cheshire plain. A century later we notice that the Kerridge stone memorial is in perfect condition, while the Bollington sandstone memorial is showing signs of erosion and wear!

After WWI, Bollington Urban District Council distributed small silver goblets to every man who fought in the war and to the families of those killed. See the separate page on this.