From yeomen farmers to landed gentry

The Gaskells who came to Ingersley in the mid eighteenth century were descended from former tenants and servants of the Leghs of Lyme Hall. The first traceable ancestor is John Gaskell of Lyme Handley who died in 1701 and was one of the tenants of the Leghs. The Gaskells proved to be shrewd investors in land and rose to the status of yeomen, eventually owning several estates and passing on wealth to eldest sons, and, given a degree of childlessness, to eldest nephews. This concentration of wealth in few hands was augmented by some opportune marriages which brought additional land and property. 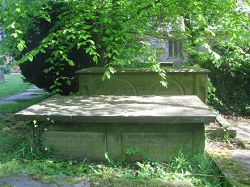 Many of the Gaskells referred to below are buried in the churchyard at St Peter’s, Prestbury (right).

John of Handley’s youngest son was William, who continued the Ingersley line and moved to Longdoles (now Higher and Lower Doles) in Adlington (accessed from Whiteley Green). Given the number of Johns that succeeded him it is worth listing the direct Ingersley descendants:

John of Adlington was a much respected yeoman and it was he who first acquired land at Ingersley (see Ingersley Hall). His brother Thomas had recently bought Sowcar, adjacent to Ingersley, and some nearby land, and this may be how John came to be interested in the area. Ingersley was bequeathed to John of Sowcar (who had inherited Sowcar from his childless uncle Thomas), but it was John of Ingersley who built Ingersley Hall in 1774. He was the first Gaskell to live there, moving with his family from Tower Hill in Rainow. He was responsible for improving or building many of the surrounding farms, enclosing land, and planting trees for timber.

John of Ingersley also had an eye both for property and the new opportunities afforded by industrial development: buying land in Ingersley Road to build cottages to house workers in the burgeoning cotton industry, overseeing the building of Ingersley Vale Mill, permitting the construction of a reservoir at the end of Ingersley Road, and opening coal mines on his land. Perhaps one of his most lasting contributions was the building of the monument we now call White Nancy at the top of Kerridge Hill. This was built to celebrate victory at the Battle of Waterloo in 1815 and was originally a summer house (right). John of Ingersley’s son Thomas only survived his father by six years and was succeeded at Ingersley by his eldest son John Upton Gaskell.

John Upton was educated at Dr Davies’ School in Macclesfield (it later became the King’s School) and went on to Magdelen College, Oxford. The intention had been for him to be ordained and to become Vicar of the new church of St John’s in Bollington (a position later taken up by his sister Jane’s husband Revd George Palmer

). The early death of his father put paid to this plan. However, he did not inherit Ingersley until after his mother died in 1851, but even so he instigated a number of improvements to Ingersley Hall following his father’s death. After his marriage in 1843 he and his wife lived for a few years at Endon House, Kerridge. 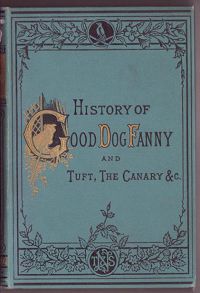 John Upton was responsible for extending and improving Ingersley Hall, and he and his wife Margaret lived a fairly extravagant lifestyle. They collected countless artifacts for their home, had holidays in this country and abroad, often with Margaret’s brother Samuel Grimshawe and his family, and they mixed with the great and good of the county. John Upton also supported the community, being a JP for 47 years, serving on the board of the church school in Bollington, being involved with various local charities, was Chairman of the Macclesfield, Bollington & Marple Railway Company, and giving evidence on the need for improvements in public services in Bollington. Throughout his life he loved horses and was a follower of the Cheshire Hunt.

John Upton’s wife Margaret was also involved in charitable activities. In 1881 she published a small children’s book: History of Good Dog Fanny and Tuft the Canary with Other Stories, All True (picture). This gives some insight into family life, but is now out of print.

John Upton was succeeded at Ingersley by his daughter Anne Theodora. She never married and lived with two female companions. She led a quiet life and was noted for her philanthropy, not only in Rainow and Bollington but further afield too. She was very ill towards the end of her life and for the last three years was confined to her room.

After her death in 1923 the house, its contents and the estate were sold off in 1933. Edward Lomas, a silk manufacturer, bought the house.

This page is extracted, with the author’s generous assistance and permission, from The Gaskells of Ingersley Hall by Bridget Franklin.

The monochrome picture is courtesy of Bollington Civic Society archive. The two coloured pictures are by courtesy of Bridget Franklin.