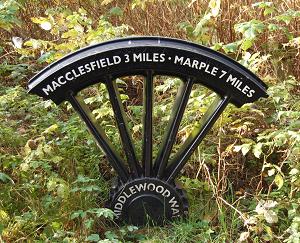 The railway closed in 1970 as part of the Beeching cuts. The entire route lay derelict, being reclaimed by nature, until 1986. Then Macclesfield Borough Council acquired the old railway and paid £1 for the viaduct across the Dean valley at Bollington. For a short time this had been threatened with demolition! A firm and voluble local protest ensured that it survived.

A considerable amount of work was then carried out to develop the railway into an eleven mile nature trail with footpaths, cycle track and bridleway along the whole length. The drainage ditches were dammed in many places to ensure that small ponds would establish wetland plants, frogs and other creatures.

The Middlewood Way has become one of the most popular walks in Bollington being very heavily used by many residents for exercise and for nature study, as well as to enjoy the views of and from the track. Access may be gained in Bollington from Grimshaw Lane, Wellington Road and Adlington Road, and in Kerridge from Clarke Lane.

There is parking at the Adlington Road Ranger station, also in Clough Bank (off Grimshaw Lane and car park immediately on the right, but normally full during office hours), and on the roadside at Wellington Road and Clarke Lane.

In 2009 a new feature has been constructed – the Bollington Festival Labyrinth is a piece of artistic stonework laid out in circles on the ground. It can be found on the Middlewood Way adjacent to Grimshaw Lane.