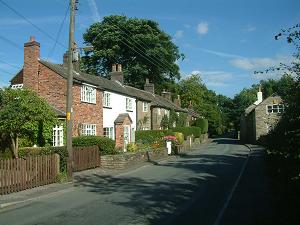 Nearest pub – The Lord Clyde is in Clarke Lane.

Both the Macclesfield Canal and the Middlewood Way are crossed by Clarke Lane. Kerridge Cricket Club have their ground along here.

; II, Formerly a corn barn, now includes a shippon and garage, 16thC. Not publicly accessible. (On Springwood Way since construction of Silk Road).