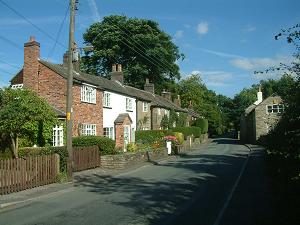 Formerly two cottages, now one house, Briar Cottage at number 4 Clarke Lane was first built in 1630. It was Grade II listed in 1983. Briar Cottage is built in sandstone, and has a roof in Kerridge stone-slate with a stone ridge. The house is in two storey`s and has a three-bay front, the two right bays projecting slightly forward. The windows are mullioned. 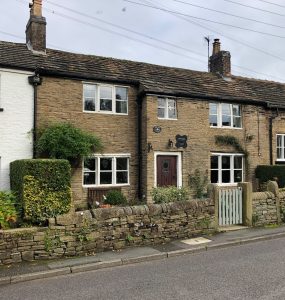 John Pownall owned this cottage in 1849 and a couple of the adjacent ones, according to the 1849 Tithe map.

1861: Mary Barlow lived at Briar Cottage. She was twenty seven and from Sheffield, she lived with her twelve year old brother and two others.

1891: James Lane lived at Briar Cottage he was aged sixty one years. He was single and originated from Adlington (Cheshire). He was a general labourer and lived with his brother William aged forty seven from Butley, sister-in-law Ann aged forty eight years and six nephews and one niece. In 1861 James Lane lived at Dumbah Lane cottages with his widowed mother Elizabeth (from Cheadle), brother William and four siblings. He was recorded then as being an agricultural labourer. (Interestingly in the census of 1871 James Lane and family apparently lived at Butley Lane, then back to Dumbah Lane in 1881, before moving to Briar Cottage between 1881 and 1891).

1901: James Lane now aged seventy one years still lived at Briar Cottage with his brother William and William’s wife Ann along with her mother Mary Shaw and five nephews.

1911: James Lane was still living here at the age of eighty one years with his family, although only two nephews were still at home. He was recorded as a retired gamekeeper at this time. 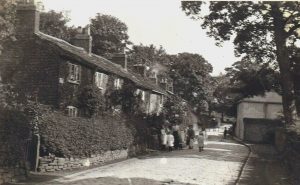 1940s to 1955: John F.Jackson and his wife Sarah aged twenty four and twenty three years respectively lived at Briar Cottage. They had seven children, all were girls except Steven who was born in 1952. One of the girls was named Helen.Their Grandfather Joseph Jackson owned three houses in this row including Briar Cottage and he rented Cold Arbour Farm.

1974: When Steve Jackson`s father John died in 1973 Steve and his Mother moved back to Briar Cottage. Steve married and left home in 1976 but his mother stayed in the cottage until the 1980s.

Our thanks go to Linda Stewart who has researched census information to present an interesting history of the house’s residents. And also thanks to Steve Jackson for his information.