Cold Arbour Farm was originally accessed from Clarke lane (see photo right) but since modern roads and new estates have grown around it, it`s access is now off Springwood Way. 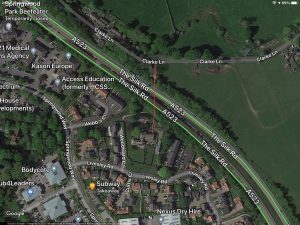 In the aerial view (photo left) you can see the original drive marked with a red line, now lying under the Silk Road. Cold Arbour or Arbor as it was sometimes known, was once part of the Hurdsfield Estate (see photo below left) and was sold in 1933 with sitting tenant Joseph Jackson.

1881: James Jackson lived at the farm at this time.

1891: James and his wife were still at the farm and by now his ten year old nephew Joseph Jackson was living with them having moved in in 1886 at the age of four years.

1911: Nephew Joseph Jackson was now head of the farm aged thirty years a farmer from Butley. His wife Sarah was about the same age. They had two daughters Dorothy Jane aged two years and baby Edith Mary. Also resident was Mary Frances Shaw aged forty six years from Barley in Cheshire and a servant William Henry Leese aged eighteen and from Cellorhead in Staffordshire.

1939: Joseph and Sarah Jackson were still living at Cold Arbour Farm with a dairymaid, their daughter Edith M. Jackson. Also Elizabeth A. Cooper a widow aged seventy three and possibly formerly of Hobson Farm Clarke Lane and also had lived at Cold Arbour Farm. Also living there was Alex. C Sutton along with her one year old daughter Jennifer.

Also many thanks to Steve Jackson for his information.