December 2021 The new building appears to be largely complete, but much remains to done in the highway. Shockingly, work has stopped completely while awaiting the completion of the highway works (poor organisation of workflow?) And as if that wasn’t bad enough when the highway works are carried out all three roads, Wellington Road, Grimshaw Lane, and Henshall Road, will be TOTALLY CLOSED TO THROUGH TRAFFIC FOR SEVERAL WEEKS !!! The entire junction area will be closed from Albert Road to Ashbrook Road plus 30m at the bottom of Grimshaw Lane will be closed off with just pedestrian access remaining. There will in fact be two closures each of up to two weeks, just a few weeks apart, beginning on 12 January 2022. Needless to say there is uproar from the community about this, not least because Bollington Town Council appear to be disinterested in challenging CEC Highways (who are the authorising body) over the need for closures rather than single line working.

2020/21 The old building was demolished in March 2020. The new building is under construction.

2018 The case has gone quiet, with no further proposals or activity. A reason for this may be that Sainsbury’s are no longer interested in locating a local store here. All the supermarket chains are winding back their development objectives for the present economic environment.

2017 After much dispute, minor changes to the car park and highway furnishing (ostensibly to make it safer for pedestrians), the plans were agreed by the CEC planning authority.

October 2016 A new application has been submitted, but it is very similar to that previously rejected. Additional attention has been given to traffic calming and pedestrian crossings. The application is widely considered to be completely unacceptable. 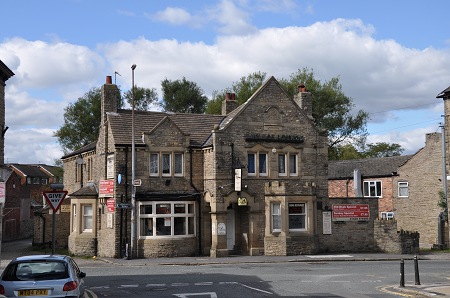 13 January 2016 Application rejected! We await to see if the applicant either abandons the project, submits a better idea, or makes an appeal against the rejection.

23rd September 2015 A public meeting was held on Monday 21st September at Bollington Cross school. The purpose was to inform Bollington Town Councillors regarding the public’s opinions regarding the proposal so that BTC could determine its response to the application at its meeting on Tuesday 22nd September.

No one could have been left in any doubt whatsoever that the public are not supportive of the proposed development. Almost all objections centred in one way or another around the traffic problems and the resulting dangers for pedestrians and road users. The Civic Society, while supporting the general tenor of objections, also objected on the grounds of the proposal to demolish the existing heritage building and replace it with one designed to have a passing resemblance.

Something sinister in Bollington?

– article in I Love Macc, written by Granville Sellars, proprietor of Brassington’s.
Please note: The Happy Valley web site is not responsible for opinions expressed in other web sites.

The owners of the old Waggon & Horses pub, which for more than ten years has been the Bayleaf Lounge and Indian restaurant, have submitted a planning application to demolish the entire building and to construct a new building, the ground floor of which would be let to J Sainsbury for use as a small supermarket, euphemistically referred to as a convenience store, the upper floor to be let to the present occupiers as an Indian restaurant.

The new building would be situated a few metres to the right and a few metres further from the kerb than the existing building and provide a two lane access/egress between it and Barrow’s butchery next door. There would be a 13 place car park in the triangular space behind the building.

Around 60 Bollington residents met at Bollington Cross school and noted their objections to the proposal. The following is a summary of the key points and is not an exhaustive list.

There is huge concern regarding the highway implications of this proposal.

The applicant attended the meeting at Bollington Cross school and listened to all the objections. He was provided with an opportunity to respond and made the following points:

The CEC Northern Area Planning Committee considered the application as submitted and alternatives could not be considered. However, the committee could provide conditions to a permission to develop. This leads one to consider what conditions might be put forward.

Further alternative have been suggested but these could not be considered by the Planning committee under the present application.