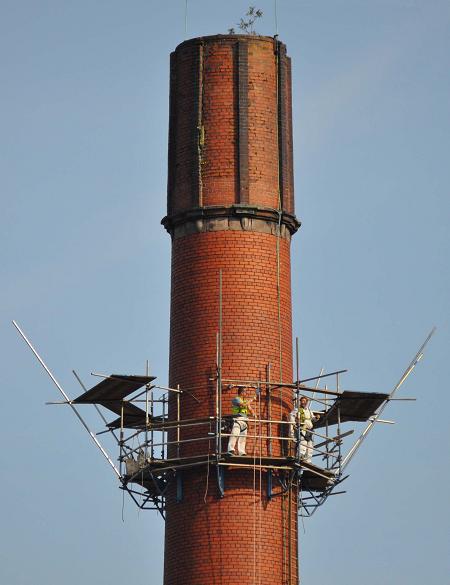 In the week beginning 6th September 2010, work was carried out by steeplejacks to remove the foliage of plants growing on the chimney. It seems that during this operation, which was completed by Friday 10th September, it was noted that the plants had dislodged a number of bricks near the top of the stack (see the picture). These bricks were deemed to be a safety risk (so why did it take a week to take any action?) – there was a danger of them falling off and precipitating a progressive collapse of brickwork from the top two or three metres of the stack.

The most important thing to note is that the chimney was not said to be in any danger of collapsing – there was simply a concern that bricks may fall from near the top. If they do they will fall down the side of the chimney and land on the scaffolding later erected beneath the damaged area.

The closure of the canalside for a whole week caused significant difficulties to the businesses located on there, including Kellico and, especially, the Café Waterside. The  Discovery Centre  was also closed for the week. The closure was so devastating to these businesses because pedestrian visitors were not able to cross the canal or the canalside mill yard.