Fine lady who devoted much of her life to Bollington 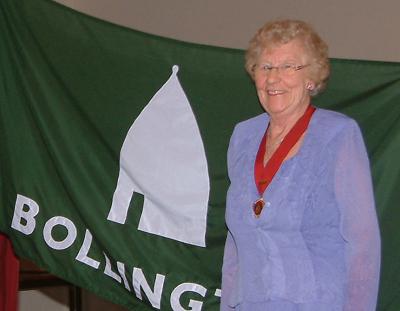 Betty Bonson was born in Bollington as Betty Hamson.

She served the town as employee or Councillor for very many decades, as well as a generous volunteer for many causes.

Betty Bonson (she was Christened Betty, not Elizabeth) was born in Bollington of the Hamson family – her several greats grandfather ran his business, in 1806, from the house at the bottom of Shrigley Road which to this day advertises upon its stone wall his trades of decorator and plumber. Betty was justifiably very proud of this heritage. Just a few metres away Hamson Drive was named to provide a permanent reminder of her family’s contribution to Bollington over the past two centuries.

One of her first jobs was in 1948 with Bollington Urban District Council (BUDC) working at the town hall; she had trained as a shorthand typist, and was employed as same and general clerk. Her shorthand speed was certified at 120 words per minute!

She married Trevor Bonson – Betty insisted that they always lived in Bollington. They had two daughters, Annette and Debbie. She had two grandsons and a granddaughter. She and Trevor ran the Deanwater Hotel at Woodford at one time.

Betty was widowed relatively young, in her fifties, but she kept very active in the community for almost a further 30 years. She was for very many years a Town Councillor and was Mayor as well as Mayoress for Sylvia Roberts when she was Mayor for the second time. In fact it was Betty who presented the Mayor’s consort’s chain of office to the Town Council when Trevor was her Consort. She was Town Mayor in 1982-83 during the Falklands war.

She was very involved with the NSPCC, and her mother, Mary Hamson, actually founded the Bollington branch of the organisation. She worked for several years for Bollington Urban District Council.

In 1998 she was one of 100 nominees for Cheshire Woman of the Year. Betty was secretary of the Mayor of Bollington’s Senior Citizen’s Committee for many years but she was still on the committee and a great worker for the organisation until she became ill. She loved walking and would be seen regularly out and about. She will be greatly missed.

The funeral service was held at St Michael’s Church in the Market Place at Macclesfield on Tuesday 29 March 2016 with refreshments provided at the Hollin Hall Hotel, Jackson Lane Kerridge. The Eulogy was given by Sir Nicholas Winterton, recent past Member of Parliament for this constituency. Just as he was recalling Betty’s great sense of humour – the lectern collapsed, creating a great noise in the church followed by much laughter! There was a feeling that Betty had engineered this from beyond the grave!

We are sure that many will have very happy memories of this great lady with a very big heart.