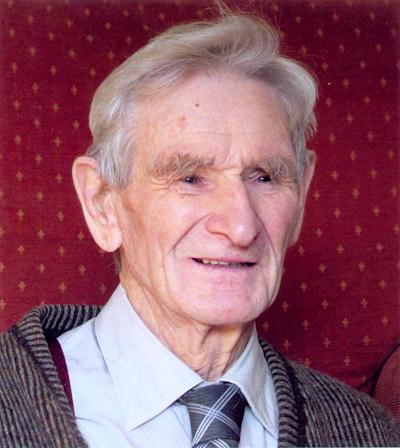 Claude retired following more than 25 years service as Bollington’s Town Clerk and was appointed Member of the Order of the British Empire (MBE) by the Queen “For a lifetime of outstanding service to local government”.

Following his military service in the RAF (1942-47) Claude became Rating Officer and then Deputy Clerk and Finance Officer in Goole RDC (1947-67). He then became the Clerk at Alderley Edge Urban District Council (1967-74), where he initiated housing for the elderly and created a ‘loans pool’ that enabled the council to pay for the reconstruction of their sewer system.

Claude became the first Town Clerk of the newly created Bollington Town Council in April 1974, and he gave the Town Council and the people of Bollington outstanding service for almost twenty-five years. His appointment followed the loss of Urban District status, and his wise guidance over the years helped establish the vital role for the new Council. Working often behind the scenes he encouraged new initiatives which gave the community a sense of belonging one to another: the “beating of the bounds” [an annual walk around the boundaries of the Town]; the annual carol service by the Christmas tree outside the Town Hall; the VE Day anniversary celebrations which saw nineteen colourful street parties and ended with a sing-song for hundreds, young and old, beside White Nancy on the hill above the Town.

Claude worked tirelessly to enable every Town Mayor to achieve their particular objectives for the Town, and to assist the many voluntary bodies in Bollington to realise their ambitions. Regular help was given to the Leisure Association which built Bollington’s Swimming Pool (1977) and to the Drop-in Centre [now the Bridgend Centre] which was able to share accommodation within the Town Hall (1990). 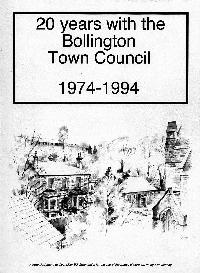 In 1979 he supported energetically the decision to twin Bollington with Thurles in County Tipperary. Bollington was probably the first town in England to twin with a town in the Republic of Ireland. As a result several Bollington Councillors were visiting Thurles on the day that the Easter Agreement [to end hostilities in Northern Ireland] was announced and able to join in the celebrations.

Claude’s hours of work always exceeded those required by his contract. In his spare time he wrote an illustrated history of the first twenty years of the council [left], with a separate chapter for each Town Mayor. He then started the Council newsletter, distributed quarterly to all householders, which has continued ever since.

After Claude retired from his post as Town Clerk in 1999 he continued to undertake many voluntary responsibilities, including his service as the Honorary Treasurer of the Bollington Drop-in Centre [now the Bridgend Centre]. He was until very recently a regular attender at their writing group and a book of his poems was published at the end of last year [2006].

Claude will be missed greatly by everyone who knew him, and should be remembered by all the people of Bollington as one of the creators of our happy community.

Order of the British Empire