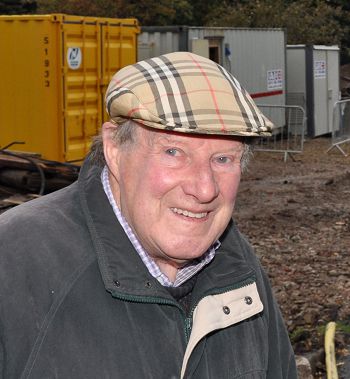 By common consent Bryon Holmes was a lovely and very funny man! Exceptionally sociable, it was impossible to pass Bryon in the street without having a chat which would always include a couple of his jokes. Often one liners, sometimes anecdotes from life – but always very funny.

Bryon was born on 13th December 1928 in Prestbury, at his grandparents’ home – his mother wanted her child to be born somewhere nice! He was brought up in Bollington Cross. He went to King’s School in Macclesfield. It was not a success. Today he would have been marked down with a ‘behavioural syndrome’. At age 14 he was very pleased to leave school. It is said that the school was even more pleased than Bryon!

He wanted to be a plumber and went straight into work. He remained with that craft all his working life. And a very good and popular plumber he was too.

His parents were farming. Bryon and his mother turned up late to his wedding, his marriage to Olga – his excuse: the milking took longer than expected! They were married for very nearly 65 years. They had two children, Robert, and Charles ‘Charlie’ who pre-deceased him.

Whenever you saw Bryon, he had the makings of a smile on his face, a certain look and you just knew that he was going to say something funny.

When I (Tim Boddington) moved to Bollington in 1975, I discovered Bryon living in the same street. My new house had been built with the boiler in the garage, wasting a lot of heat. I decided to have the boiler moved to the kitchen and that required to have pipes laid the length of the house as well as the physical move of the boiler – a moderate sized upheaval. I asked Bryon if he would do this. “Yes, I’ll be round on Monday morning.” He duly turned up at about 9. We unloaded all the pipes and fittings onto the garage floor and then had a look at the present installation and discussed the order of work. And then he said “Right, well if you have any problems, give me a ring.” And as I stood there gobsmacked, he got in his van and drove off! Well, plumbing’s not that difficult really, so I just got on with it. He called back later to check what I was doing, and acknowledged that it was all OK. Ever since, I have been doing my own plumbing. Thanks, Bryon, for the grounding!

On another occasion he was asked by a local lady to fit new taps to her basin. On completion she asked Bryon “Which tap is the cold water?” Bryon responded “The right one, always the right hand tap for cold”. “Then why do both taps have an H on them?” “Ah well” says Bryon, “The H on the left is for Hot, and the H on the right reminds you that Holmes was the plumber!”

Back in 2013 (October 15th) I was at the Waterhouse mill site to take photographs of the demolition work when I noticed Bryon standing at the gate. I went and had a chat and he told me that he had worked at the old mill in his young days. After WWII he had the job of cleaning the blackout paint from many of the windows – he didn’t enjoy that. I described to him the tunnel that was being dug up by the excavators – several hundred metres in length, it ran from the water wheel pit to take water back to the river down by Garden Street bridge. It was about 1.5m in height and width, too low to stand, and it was beautifully built in dry stone, and even after 220 years the bottom was still reasonably clean. He then told me that he once had to climb along inside the full length, with just a hand lamp and his tools, to inspect it for missing stones and other damage, and then repair it! An incredibly back-breaking task. I took his picture – see top of page.

Bryon enjoyed a wide social life and was especially keen on golf, which he played until he was 66. He played at, and was very involved in, the Cavendish Golf Club up at Buxton and rose to be Vice President (the Duke of Devonshire was always President).

On one occasion he got the job of caddying (which includes giving advice) for leading golfer Tony Jacklin in a major competition. At a particular hole Jacklin asked Bryon for a Four iron. Bryon said “Do you think so, I played this hole with a Five the other day”. “Oh, did you?” says Jacklin, “OK then”. The ball landed in a bunker in front of the green. Says Bryon “Oh! That’s just where mine went!”

Bryon’s funeral was held at Macclesfield crematorium on Wednesday 8th February 2017. It was a joyous event, standing room only. Daughter-in-law Amanda Holmes gave the most excellent Tribute on behalf of the family. Bryon leaves his wife, Olga, son Robert and his wife, as well as several grand-children and great grand-children.

My thanks to Amanda and others for much of the above information.