Below is the first chapter from A Kerridge Childhood written by Enid Simpson. For a full introduction and index to all the stories please see the head page.

Kerridge was a much prettier place than nearby Bollington. Cotton mills and the sprawling rows of houses had spoilt many of the characteristics of Bollington village. Kerridge, built on a hillside, was set amidst farmlands, lush pastures and lots of trees. There was no pattern to the buildings. Like Topsy, they just ‘grew’. However else could a terrace of ten houses have been built high on a slope with many steps to it, and no reason at all for its being there? Or why houses, like the ones we lived in, had lovely front doors overlooking the meadow, and backdoors facing the road? [Enid lived in the second house from the right (picture below), set back from the meadow] 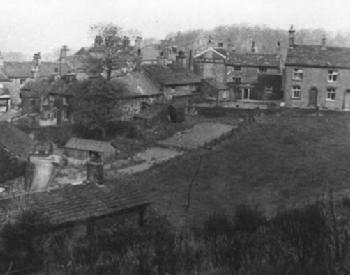 The roads had probably originally been farm tracks, thus explaining their meandering curves. Unlike the dirt roads in America, they were surfaced with small stones which prevented horses from slipping as they pulled carts laden with stone which had been quarried and was now bound for the wharf on the canal, to be transported to the towns.

The house in which we lived, No.1 Redway Lane, was one of three in a terraced row. Opposite, built in the wall, was a horse trough which always contained water for the horses who worked so hard up and down the hills. I think our house had been part of a farm at one time, as there were several outbuildings, a wash house, a dairy which was half sunk in the ground for coolness, and opposite this was the lavatory or earth closet.

Inside the lavatory was a long wooden seat with one large and one small hole (for large and small bottoms) and a large stone step for the small people to adjust themselves properly. Each hole had a lid to cover it and the whole thing was scrubbed white. I can’t think of a more disagreeable task! Toilet paper consisted of newspaper cut into neat squares, which were pierced and threaded on a string. It was most infuriating to read your piece of paper and then find half of it missing! These closets were emptied regularly from the outside of the building, and the men who performed this revolting task were called ‘night soil men.’ Presumably, their rounds took place after dark. Eventually, water closets superseded this archaic system, and had the letters “W.C.” painted on the doors. Dolly and Uncle Hugh still refer to their lavatory as the W.C. or, more familiarly, the “W”.

White Nancy, whose unexplained round white house sat atop the hill, dominated the scene on the east side of the village. A church and a Wesleyan Chapel sat on either side of the Bull’s Head, the local pub. There were two or three ‘big’ houses where the local gentry lived. One of them, Endon House, had the distinction of having its own private road and though the road was used regularly by the public, it’s gate was closed one day a year – on New Year’s day – thus demonstrating to the ordinary villagers that it was not public property.

The farms, known by the name of the owner: Pickford, Jackson, Brown, etc., were mostly dairy farms, although not on the scale of today’s scientifically run farms. The fields were divided by Hawthorn hedges, providing homes for the birds and whose sweet scent was prevalent throughout the spring and summer. The cows grazed in the pastures and came home each night to be milked. Their yield was put on the train next morning for the towns – mainly Manchester.

Our milk came from Jackson’s farm, whose real name was Swanscoe farm, and it lay at Kerridge End. As the name implies, it’s locality was at the end of the village. If we needed extra milk, or cream, or cheese, we’d walk along Higher Lane, past Endon House and it’s open gate, and pass the stables. I don’t think any horses were stabled there then, but the buildings were always neat and clean. I can see the stable clock now, with its black face and gold numbers which was always set at the correct (Greenwich) time. From there we went through the Underwood, whose path consisted of rich leaf mould and where an underground spring gave us a refreshing drink. In the spring, when the trees were in full leaf, the wood was carpeted with bluebells. The thrill of seeing this drift of delicate colour and catching the elusive perfume never failed. Such was the local dialect that for years I thought the name of this enchanted wood was Thunderwood. What they were really saying was Th’Underwood.

Mrs. Jackson brought the milk daily, using a horse to pull the float. This cart had two wheels and a small opening at its rear with a step to enter easily. The churn stood somewhere in the middle and each housewife came out with her jug while Mrs. Jackson measured it out with a ‘dipper,’ always generously adding more to fill up the jug. She had several scheduled stops and the women would gather to pass on or receive the latest gossip. Several times she would pull on the reins, which passed through the front board, to go to her next stop, but the horse had a sixth sense and wouldn’t budge until he knew she had finished her chat.

Because of the distance to the local school, the Wesleyan Chapel was used for small children, from three years old up to about six, I think. Off we proudly marched at this tender age to present ourselves for the start of our education. There were four classes with about six or seven children in each, and one teacher, Miss Rowlands, to supervise the lessons.

The three-year olds were put in the Babies class – Mother tells me I flatly refused to go into this class as I considered myself as having finished with babyhood. So into the third class I went, and gradually went through the second and first classes before going to the Big School. We all learnt to read and write and do simple arithmetic. Miss Rowlands wore her hair in the fashion of the time, with a centre parting and a pad under each side piece. One day I remember her asking us to be quiet as her head was splitting. I watched all afternoon with bated breath, hoping it wouldn’t. I had a horrible fear that her centre parting would really do that!

Her pince-nez fascinated me too. How I longed to be old enough to wear these eye glasses and take them on and off my nose when talking. Alas, they were out of fashion by then.

My grandparents lived in Higher Lane, which wasn’t too far from Kerridge School. I loved to visit Grannie [sic] after school and no doubt she had little treats for me. Afterwards away I would go, across the fields to my own house. Such was our peaceful existence that nobody worried if I didn’t turn up at home at the appointed time, Mother knew that Grannie would send me home, and if I didn’t pay a visit to Grannie, she wouldn’t worry either.

This arrangement was nearly my undoing on one occasion as I managed to get locked in school, and both Mother and Grannie in turn thought I was at the other’s house. The truth was that Mother had made me a new coat with lots of fasteners and they all had to be fastened. So absorbed was I in fastening all these buttons that I got left behind. The school was set back some distance from the road which wasn’t busy. The school caretaker had another job in the daytime and never went into the building until later in the evening. By some quirk of fate our neighbour was returning from one of his journeys to the canal wharf and heard me raising Cain. I don’t remember much about it all. but I was assured that it never happened again.

Another memory comes back to me from this time. Poor as we were, there were families in much worse circumstances than us. One family, the Allans, had a large family and I went home one day from school and told Mother how I wished my hands were blue like Nellie Allan’s. Only when she gently explained that Nellie’s hands were blue because she didn’t have enough to eat, did I understand.