Below is a further chapter from A Kerridge Childhood written by Enid Simpson. For a full introduction and index to all the stories please see the head page.

I walk around the supermarket doing my weekly shopping and pick up a plastic bag of oranges which are labeled 89p for ten. All the vegetables are in similar bags – celery, carrots, potatoes, cabbage and lettuce. All are stacked neatly in rows. Moving on to the dairy section, I pick up butter in a colourful packet which tells me it is from Land O’Lakes and bears some mysterious hieroglyphics on the side. Margarine is in a coloured dish which when emptied, will do to collect pins or crayons.

Everything is in soul-less plastic packets, meat on little white trays, sausage similarly packed. Hygienic yes – but so dull! Then I move on to the checkout and am hypnotized by those almost magical electronic cash registers. I watch the clerk touch the keys and record from which department each article came. Red figures flash up on the register and when the time to pay comes, the small change tumbles out of a chute almost bewildering older people. No reckoning up in her head for today’s checkout girls. I doubt if many of them could.

The shops were so different in my village and I suppose everywhere at that time. The local Co-operative store was the most popular shop because for every pound spent, a dividend was paid at the end of each quarter. The more money spent, the greater the ‘Divi’ to be counted on for extra purchases. 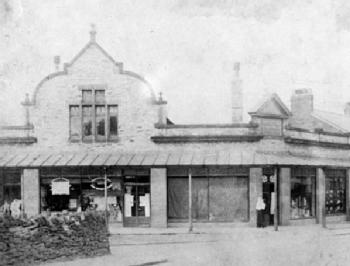 The shop was staffed for the most part by men, and their appearance was impeccable. They always wore a starched white collar and a neat dark suit. To protect their clothes, they always wore a long white apron with a fringe at the bottom which just brushed over their highly polished black boots.

The grocery counter was long and had a set of brass scales on it. The weights stood in a graduated row and the smallest – the half ounce – had a string tied through its top, in case it should stray because it was so small.

Behind the counter and along the whole length of the wall were wooden drawers, each labeled to identify it’s contents – currants, raisins, sultanas, candied peel, spices, and condiments. On top of the drawers stood a row of large brightly painted canisters. Red, gold and black oriental lettering denoted the kind of tea. they contained.

Tea was delivered in tea chests and then went into the canisters I have described. The assistant would make up the tea into quarter or half-pound packets. First he weighed out the leaves on the scale and the weight was exact – there wasn’t a leaf over or under. Then he would tip the contents on to two squares of paper – one thin and white on the inside, and one thick, and coloured for the outside. With deft fingers, almost like a conjurer, be would fold these papers into a leak-proof bag without the aid of glue, Cellotape, or anything but his own skill. I was a fascinated onlooker and though I often tried to imitate the procedure, I never succeeded.

Stacked on part of the counter were blue bags of sugar which the assistant weighed in and packed during any time the shop was empty. Currants, sultanas and candied peel were also packed thus and the colour of their outer packets denoted the contents – blue for currants, yellow for sultanas and maroon for candied peel. Raisins came only at Christmas.

Another counter ran at right-angles to this one and its marble top displayed all the cuts of bacon and ham, cheeses, blocks of butter and lard. The scales on this counter were flat with a round marble plate to weigh out the goods. The brass weights were flat and circular and each fitted into the other, forming a cone.

Behind the counter were two marble-faced compartments. There the butter was cut, patted into shape with 2 wooden pats, which were constantly dipped in cold water, and finally, decorated with a motif from a mould, maybe a cow or a sheaf of corn. The speed and dexterity displayed by the assistants in doing this had to be seen to be believed. So adept were they that they could gauge to half an ounce how much butter to cut off.

Cheese was cut from a large round cylindrical shape by flicking a wire and all the customers were encouraged to taste a sliver before deciding which kind to buy.

Sides of bacon and ham hung from the ceiling and often there would be links of sausages as well. Stacked on the floor were tins of biscuits with the lids off for all to see the contents. One of the nice things – born of necessity because of the small wages – was being able to buy two ounces of butter or cheese, one or two slices of bacon which would be cut to the thickness you selected, and a couple of eggs.

Just inside the door were sacks of potatoes, corn, Indian corn, etc. These sacks always had the tops rolled down neatly, and nothing ever seemed to spill over the floor.

There were always a couple of chairs on the customers’ side of the counter and they were well used as the housewives sat and decided what was going to make up their grocery order for the week. No-one was ever hurried. Each assistant reckoned up the purchases in his head and never needed a pencil or pad to make the final total. The money was checked into a drawer which slid under the counter – there were no cheques or charge cards in those days. Only hard earned ‘brass’.

When the purchases were completed, the next part of the magician’s act was performed. From under the counter would come a huge sheet of brown paper to be laid flat, and then the job of stacking all the groceries on it to make a neat and square parcel. No matter how oddly shaped the contents were, a perfectly square parcel was always accomplished and tied up with string. It was tied up carefully and safely, and once the last knot was in place a swift twist and eureka! the string was broken, no scissors were needed.

The smells from these shops were always appetizing – ground coffee, bacon, cheese and newly baked bread. As I said, it was almost like another world.