We have an excellent picture of the Thompson family of Bollington together with the names of most of those present. The picture seems to have been taken around 1913/14; it can’t have been any later than late summer 1914 (plants!) because William Thompson died in February 1915, and two of the young children were only born in 1908 and they look to be 5 or 6 years old. It was taken outside the family home at 11 Moss Brow which is part of the Manor House that was, and now divided into three cottages. 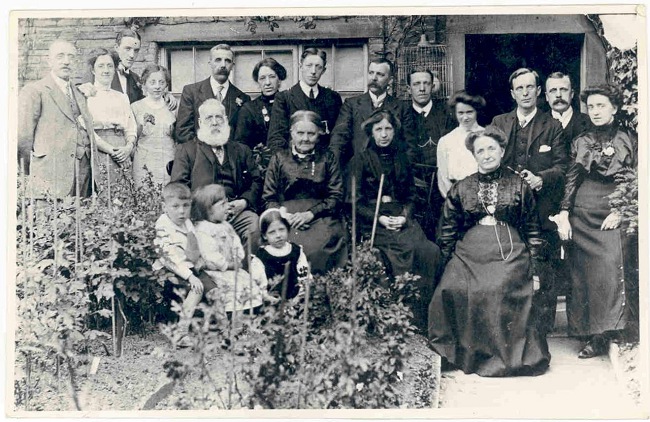 Back row, from left:

Three generations of the Thompson / Taylor family have run the shop on Bollington Road, Bollington Cross (opposite the Cock & Pheasant).

The poll parrot in the cage (to the left of the front door), was brought back by Jack Hayes who was a seaman who travelled all over the world. He married Elisa Perschuitta in Italy and they came back to Bollington to live. Many thanks to Debra Nixon for this nugget!

The picture and information were sent by Debra Burgess to whom I offer grateful thanks.