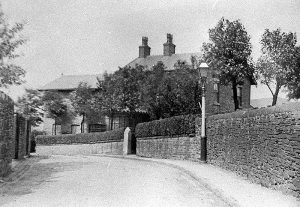 Kellys Directories from 1892 to 1915 lists Robert Holland Owen as the resident of Bleak House on Hurst Lane. On the 1911 census Robert was a Bleachers (calico) salesman worker aged thirty nine years and originally from Knutsford. His wife Mary was forty one years old and was from Manchester. Their son Robert Leslie who was born in Bollington was just six years old at this time. Robert junior was better known by his middle name Leslie. Below is a cutting from the Manchester Evening News (supplied by May Ellen Hockenhull) from when Leslie was in hospital with a fever during the first world war aged about twenty two years. Also living at Bleak House in 1911 was Jane Skelmerdine who was Mary′s mother, and also there was a governess and a servant living there. 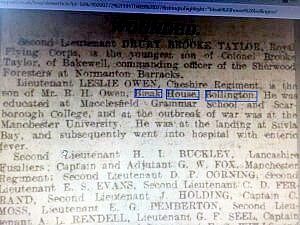 1911: Robert Holland Owen was still at Bleak House with his wife Mary and a daughter Gertrude. They had a visitor at this time called Rosetta Armstrap who was governess in the 1901 census. There were also two servants named Gertrude, so three Gertrudes in the house!

1915: Robert Holland Owen was still at Bleak House according to Kelly′s Directory.

1920 to 1923: Bleak House is occupied by Frank Ernest Sandford and Clara Sandford presumably his wife.

1924 to 1926: John Norman Knight described as a Mill Manager (possibly of Olivers) lived at Bleak House with his wife Madge. And in 1925 they had a son John. Incidentally after living at Bleak House John senior moved to Swanwick House in Prestbury presumably with his family around 1927 to 1929 and in 1929 he met a sad and mysterious end after vanishing off a ship on his way back from New York. (see newspaper clippings supplied by May Ellen Hockenhull). 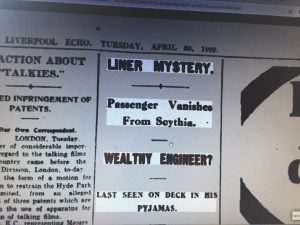 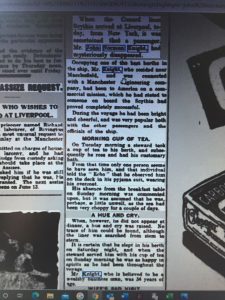 1923 to approximately 1935: An article in the Liverpool Echo in 1935 mentions the occupier of Bleak House was Harry Rome. (see newspaper cutting below and information supplied by May Ellen Hockenhull). 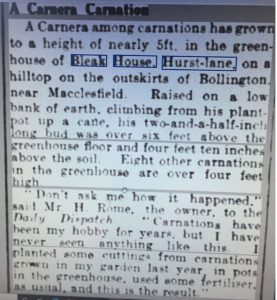 Sadly Harry died a few weeks after this article in Manchester at the age of forty eight years leaving behind his wife Annie (married 1912 in Chorlton) and five children Joseph, Ronald, Dennis, Dorothy and Harry Andrew, their ages ranging between twelve and twenty two years, the eldest two were born in Chorlton and the others in Stockport.

, which was on Bond Street in Macclesfield. Later it became Marstons.

He Lived with his wife Florence (or Nell) aged forty four years and their two children Pat and John, the latter became a vicar in later life. Norman G Maxfield a builders clerk aged seventeen also lived at the house, possibly a lodger.

More recently Tommy Cooper (not the comedian!) lived at Bleak House in the 1980s until about 2005.

The current occupants of Bleak House have lived there for about fifteen years as of May 2020.

website. Our thanks go to Linda Stewart who has researched census information to present an interesting history of the house’s residents.