. Bollington has a ‘retained’ fire service based in Albert Road and so the station is not continuously manned, not even during business hours. Cheshire Fire & Rescue Service are responsible for providing the service to the whole of Cheshire – Cheshire East and Cheshire West & Chester.

. As well as a general purpose fire engine, Bollington is also equipped with an Animal Rescue Unit. The volunteer crews are all trained in rescuing animals small and large including farm cattle and horses. 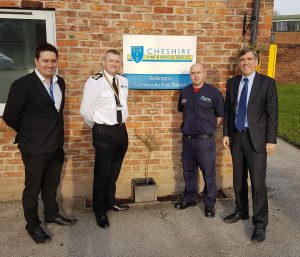 Our MP was pleased to learn that, under new proposals being put forward by Cheshire Fire & Rescue Service, additional emergency response vehicles would be allocated to the Macclesfield area. This includes Rapid Response Rescue Units at Poynton and Bollington Fire Stations to improve response to road traffic accidents; and additional resources to address situations, involving flooding and wildfires. Mr Rutley discussed with Mr Cashin and his colleagues how these new resources would help better address any flooding incidents in the future. There are also plans to replace Macclesfield Fire Station’s current aerial appliance – which applies water to fires from a height – with a new High Reach Extending Turret vehicle

. This has advantages over the old model in that it can pierce through roof materials to more effectively fight fires.

These plans are contained in Cheshire Fire & Rescue Service’s draft Integrated Risk Management Plan, which has been recently published, and sets out the steps that the Service will take to prevent and protect local communities from fire and other emergencies, and enhance its response when emergencies do occur. The Plan is currently subject to an ongoing public consultation, which will run until 20th March 2020. Local residents can view the draft plan and have their say on proposals at Cheshire Fire & Rescue Service’s website

On his visit, Mr Rutley took the opportunity to tour the fire station, which has recently been refurbished to more effectively support operations at the station and the fire crew that is based there. He met with members of the on-call team who were on duty during his visit, and thanked them for the vital work they do in keeping residents in local communities safe, often putting themselves at risk in doing so.

Speaking after his visit, Mr Rutley said, “I was pleased to have the opportunity to meet once again with Mr Cashin and to discuss important local priorities for Cheshire Fire & Rescue Service in our area. It is positive to learn that additional vehicles are being directed to our area, and helping to enhance local firefighters’ responses to serious incidents, including flooding. I would also like to extend my warmest thanks to all the hard working fire crews in our area and across the Borough. They do vital work, which deserves our strongest support.“