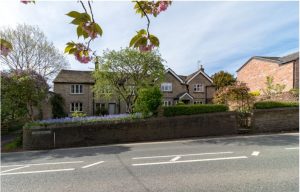 Heywood Farm was built in 1650 and is situated at number 2 and 4 Bollington Road.

The Tithe Map of 1849 state that this building was owned by Brodbelt Exors of the late Thomas John Bryde. The occupier was Thomas Middleton.

1891: The Parrott family were living at Heywood Farm or 4 Bollington Road at this time although it doesn`t seem to have been named at this time. Head of house was William Parrott aged forty three years and was from Dean Row, Cheshire. He was described as a farmer and wheelwright. His wife Sarah was a year younger than her husband and was born in Alderley, Cheshire. They had four daughters and three sons all born in Macclesfield apart from the youngest who was born in Bollington. Their ages ranged from two to twenty four years and the three eldest were all cotton operatives.

1901: Sarah Parrott was still living at 4 Bollington Road but was a widow. She was listed as a farmer. She still had five of her children living with her aged between twelve and thirty years. Their occupations were cotton operative, blacksmith, wheelwright and dressmaker.

1911: There are two households living at 4 Bollington Road at this time. They were the families of two of the sons of William and Sarah Parrott. Firstly George Parrott aged thirty three years listed as a farmer, and his wife Sarah aged thirty eight years and originally from Wilmslow, Cheshire. They had a son Reginald and a daughter Jessie, aged three and two years respectively and both were born in Bollington. There was also a servant living with them. His name was frank Downes and he was eighteen years old and from Pott Shrigley near Bollington. He was a farm labourer.

George Parrott`s brother John James and his family were supposedly also living at 4 Bollington Road in 1911 however, they are also listed as living at 10 Bollington Road in this year. John James was thirty two years old and was listed as a wheelwright. His wife Martha Ann was two years older than her husband and she originated from Kettleshulme, High Peak. They had three young children aged between ten months and four years, all were born in Bollington. The middle child, a son was later listed in the Bollington Cross National School records as living at Heywood Farm as opposed to 4 Bollington Road so assumable the name of the farm was changed to Heywood Farm some time after 1911 and before 1920.

1939: John J Parrott and his wife Martha were still at Heywood Farm aged sixty and sixty two years old respectively. John was still a wheelwright. There was also May (Annie M) Truman living at the farm, she was forty six years old and described as married but there is no mention of her husband on this census. May was a hammer machinist for silk hankerchiefs. Presumably the following two persons were May`s children, Enid McKinley (Truman) who was aged nineteen years and was described as a confectioner, and Herbert Truman who was twenty two and was an under gardener. Both were single.

Before the war Roly and Florence Wade lived at Heywood farm, see articles below taken from Bollington Live magazine from July 1998. Click on them to enlarge. (sorry the images are of poor quality). 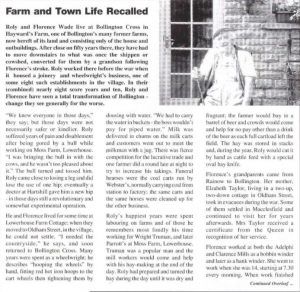 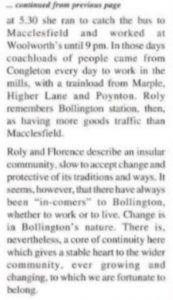 Roly Wade was born in 1915 and died in 2009. He had at least three daughters named Mary, Lynda and Margaret.

1980: Keith Goodwin a sculptor and lecturer in Manchester was living at Heywood farm in the 1980s

Our thanks go specifically to Linda Stewart who has researched census and other information to present an interesting history of local people and properties. And special thanks to Mary Hollick nee Wade for some of the information above.