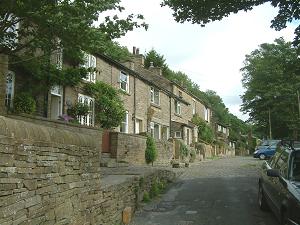 Higher Lane in Kerridge has a beautiful row of stone built cottages perched high on the hillside and commanding outstanding views over the countryside. With its setted road and stone walls the top end of this cul de sac is one of the most delightful roads in the district.

Because these cottages and others nearby were once the homes of quarry workers there is a maze of footpaths around them, many of them paved with stone slabs. One even has a tunnel where it passes beneath the remains of a long disused quarry building. Higher Lane was once known as Garret Brow and also called Pepper Street by the quarry workers. Note that only about half of the road marked on the Google map is actually accessible to vehicles. The remainder is all private but accessible on foot.

The relevant Google Map sector gets the location of Higher Lane incorrect. The driveway that is the track of the old Rally Road is labelled as Higher Lane, whereas Higher Lane (the road to the north) is blank!

In the 1870s, at least the lower part of Higher Lane was called Garret Brow. Click on the map on the Endon Hall page. More on brows.