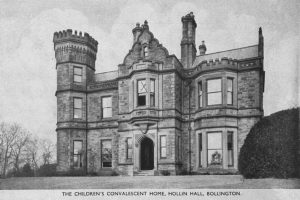 Hollin Hall was the home of the Victorian Bollington industrialist Joseph Brook II. Built in 1858 this lovely Gothic style stone mansion has now been tastefully converted into a quality hotel. The architect is thought to have been James Stevens who designed many large buildings in the Macclesfield area. In the late 19thC the hall passed to Henry Davenport, a local man who had returned after making his fortune in the United States. In the 1930s and 1940s the hall was used by the Manchester & Salford Hospital Saturday Fund

as a convalescent home for sick children. In the 1960s it became the Belgrade Hotel, and has been a hotel under different names ever since. Hotel proprietors have at various times extended the building in order to accommodate more guests. It is the only hotel within Bollington/Kerridge. There are others locally at Pott Shrigley, Tytherington and Macclesfield. The most notable feature internally is the main staircase and it’s coloured glass roof light. The front of the hotel enjoys outstanding views down the fields to the west.

1861: Joseph Brooke II (Brooke family) lived at New Hollin Hall after he finished building it. He was twenty five years of age at this point and was a cotton spinning manager and employer of 900 people. He lived with his twenty one year old wife Mary Raffles Bulley from Liverpool and their newly born son Joseph Raffles. They had five servants living with them.

1871: Joseph Brooke II was still living at Hollin Hall (no `new` in the title this year). He and his wife Mary Raffles Bulley now had a further two children. As well as Joseph Raffles now ten years, there was also Leonard and Mary E. aged eight years and one year respectively. They were both born in New Brighton in the Parish of Wallasey, this was where Mary was born and grew up, her family still lived there. There were five servants at the Hollin Hall at this time. By 1881 Joseph and his family had moved to Hollin Old Hall

1881: Samuel Fitton now lived at New Hollin Hall, he was sixty eight years old and from Nantwich, Cheshire. He was flour miller and employer of twenty five men and also a farmer of forty five acres and employer of three men. Samuel’s wife Anne was a year younger than her husband and was also from Nantwich. They had visitors staying with them, Elizabeth Cliffe aged fifty three years and her daughter Lucy aged thirteen years, both were from Nantwich. There were two servants from Staffordshire.

1891: Henry Davenport a mill owner from Macclesfield lived at Hollin Hall (referred to as New Hollin Hall at this time) he was aged forty six years old and lived with his wife Hannah Elizabeth (nee Higginbottom) aged thirty two years and from Prestbury. They had three children, Henry William aged four years and born in Wilmslow, Frank S aged one year and born in Bollington and finally Alice Maud aged seven months and also born in Bollington. Alice S. Lees from Prestbury also lived with the family, she was described as ‘living off own means’ and was an aunt to Henry although this is doubtful but not impossible as she was a year younger than him. They had a cook and a housekeeper from Prestbury and Gloucester. Henry had made his money as an industrialist in the United States of America where he owned a mill. Upon returning to England he bought New Hollin Hall and retired as he still had income from his business interests overseas.

1901: Henry Davenport was still living at Hollin Hall and had quite a house full now. His wife Hannah was still there along with their children Henry William, Frank S and Alice Maud but now there were two more sons, Frederick Bromley and Richard H aged eight and seven years respectively. There was another relation named Jane E Higginbottom aged twenty one years and described as a step daughter. She was born in Pendlebury and as Higginbottom was Henry’s wife Hannah’s previous name one can assume she was either born out of wedlock or her mother Hannah was widowed before she married Henry.

1914: Henry Davenport was still at Hollin Hall in 1914 but by 1915 the electoral role lists his son twenty two year old Frederick Bromley Davenport as a lodger paying rent of 25 shillings a week for a furnished bedroom on the first floor to his mother Hannah E. Davenport. There is no mention of either Henry or Hannah living at Hollin Hall at this time. It is believed Henry Davenport died in 1916.

During WWII the house was owned by the local church and converted to a children’s convalescent home/orphanage. Later it was converted into a hotel and renamed The Belgrade. It stayed under the ownership of Mr Lukic for several decades and was extended and improved with a beautiful conservatory built. In the late 20th and early 21st century the hotel changed hands many times and reverted back to it’s original name of Hollin Hall but without the ‘New’. Over the past 40 years, the Hotel has been owned and managed by a range of different operators.

Chilled Prosecco and a Delightful Afternoon Tea. All from just £11 per person.
CALL NOW
Sunday Lunch

3 Course Sunday Lunch & Half Bottle of Wine. All for just £14.50 per person.
CALL NOW
Spring Staycation