Also known as Old Hollin Hall. This building off Grimshaw Lane was formerly a hall and then a farmhouse named Hollinhall Farm (click on map image to enlarge). Nowadays it is divided into two houses. The core is C17 with additions in the C18 including raising the roof. These alterations were done for Richard Broster born 1770 in Bollington and died in 1817.It is constructed of course buff sandstone rubble, with Kerridge stone slate roof, and stone chimneys. The house is in two storeys over a barrel roofed cellar. The main front has three bays with 19th-century four-light windows, and two gables, each with a two-light window. Elsewhere the house is in a Jacobean style with either mullioned windows or mullioned and transomed. In the cellar is a large slab reading `This must stand here forever, Richard Broster 1757`. Perhaps this was referring to his father. There is a story about this which goes as follows … ‘In 1745 (there was conflict with the Scots going on) it is said that a troop of soldiers were marching from Stockport to Macclesfield in charge of a wagon which was loaded with the King’s chest of money. The soldiers were very drunk by the time they got to Poynton and the weather was grim, being very foggy. At that point they came across ‘a local’ who offered to assist them with the wagon. Offer accepted, the said local took over the wagon and gradually overhauled the soldiers, leaving them some way behind in the fog. At the Legh Arms he turned smartly left and headed for his home at Hollin Old Hall, leaving the unwitting soldiers to continue to Macclesfield! We are not to know their destiny! The wagon arrived at Hollin Old Hall and the contents of the chest discovered! The whole lot was said to have been unloaded and hidden under a stone in the cellar and, no doubt, all other evidence disposed of. I wonder if this is what the stone referred to? I seem to recall that someone later had a look under the stone and found nothing. Of course, this could just be a story – but you never know!’ Thank you webmaster Tim Boddington for that tale – I (Tim Boddington) seem to recall that I got the story from Malcolm Bower who studied the conflict of 1745 in great depth!

A Broster (Martha) still owned the hall in 1849 according to the Tithe map.

Later around 1870 the whole house was remodelled by the Ascoli family and split into two residences.

1881: Joseph Brooke II 1836-1912 was forty five years old and listed as a cotton spinner when in fact he was a director at Clarence Mill, (Joseph Brooke II). His wife Mary Raffles Bulley was forty one years old and from Romiley. Their son Joseph R was twenty years old and was born in Prestbury. His brother Leonard aged eighteen and sister Mary E aged eleven years were both born in Wallasey. Joseph’s sister in law from Wallasey aged twenty eight years also lived at Hollin Old Hall, her name was Agnes Amy Bulley aged twenty eight years, she was a school teacher. She went on to marry her sister Mary’s husband Joseph following Mary’s death. There was also one servant in the house, twenty three year old Mary Bowers from Appleby, so there were three Marys’ in the house!  Joseph Brooke II was made Bankrupt in 1886, see photo left. 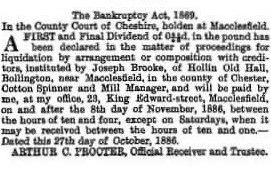 In the previous census of 1871 Joseph and his family lived at Hollin Hall. Joseph died in Chorlton at the age of Seventy Six.

1954: A lady with the surname Ascoli was resident in this year in the front main part of the House

So the Ascoli family had been living at Hollin Old Hall since around 1870. All the above residents lived in the other half of the house presumably.