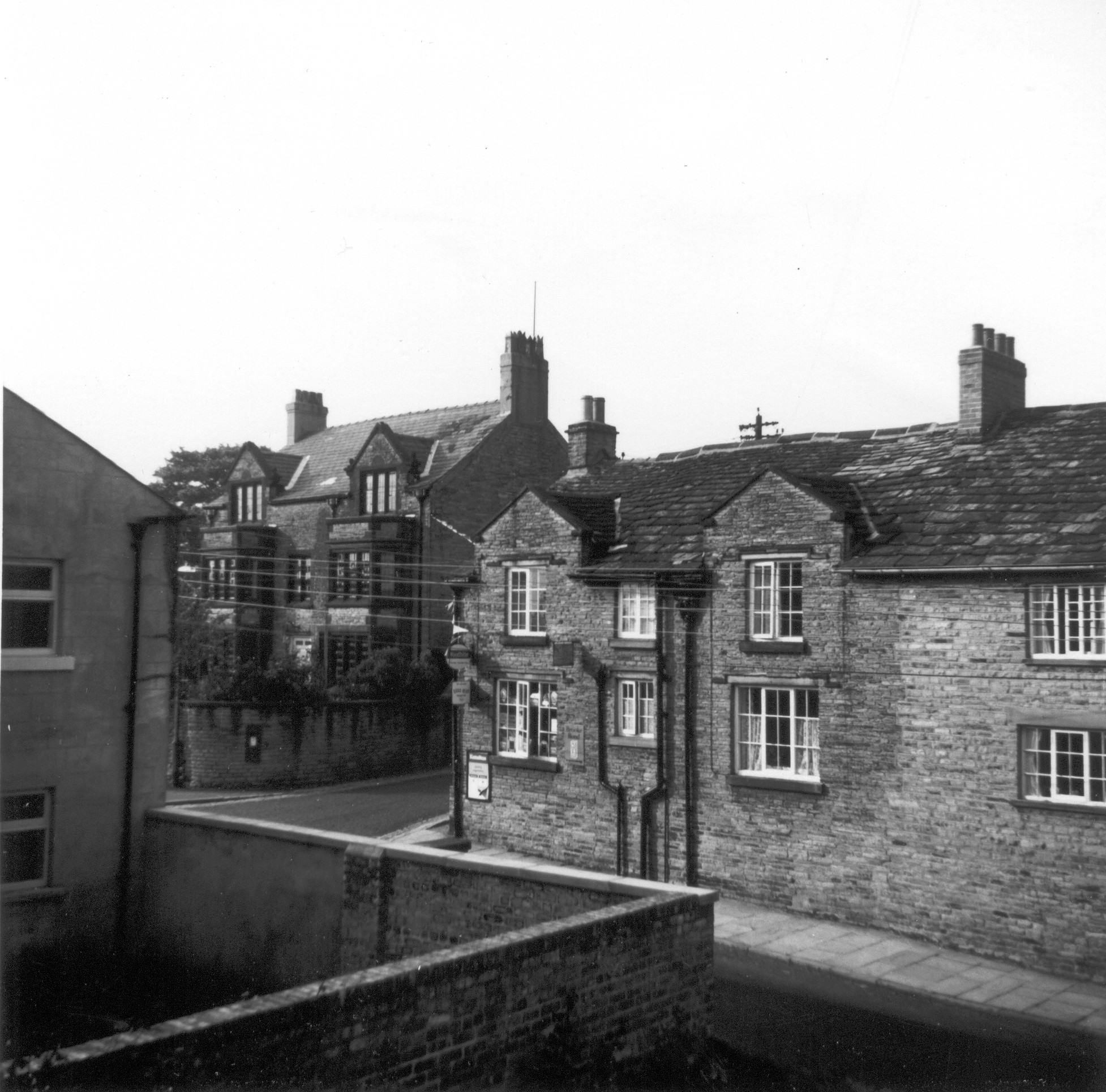 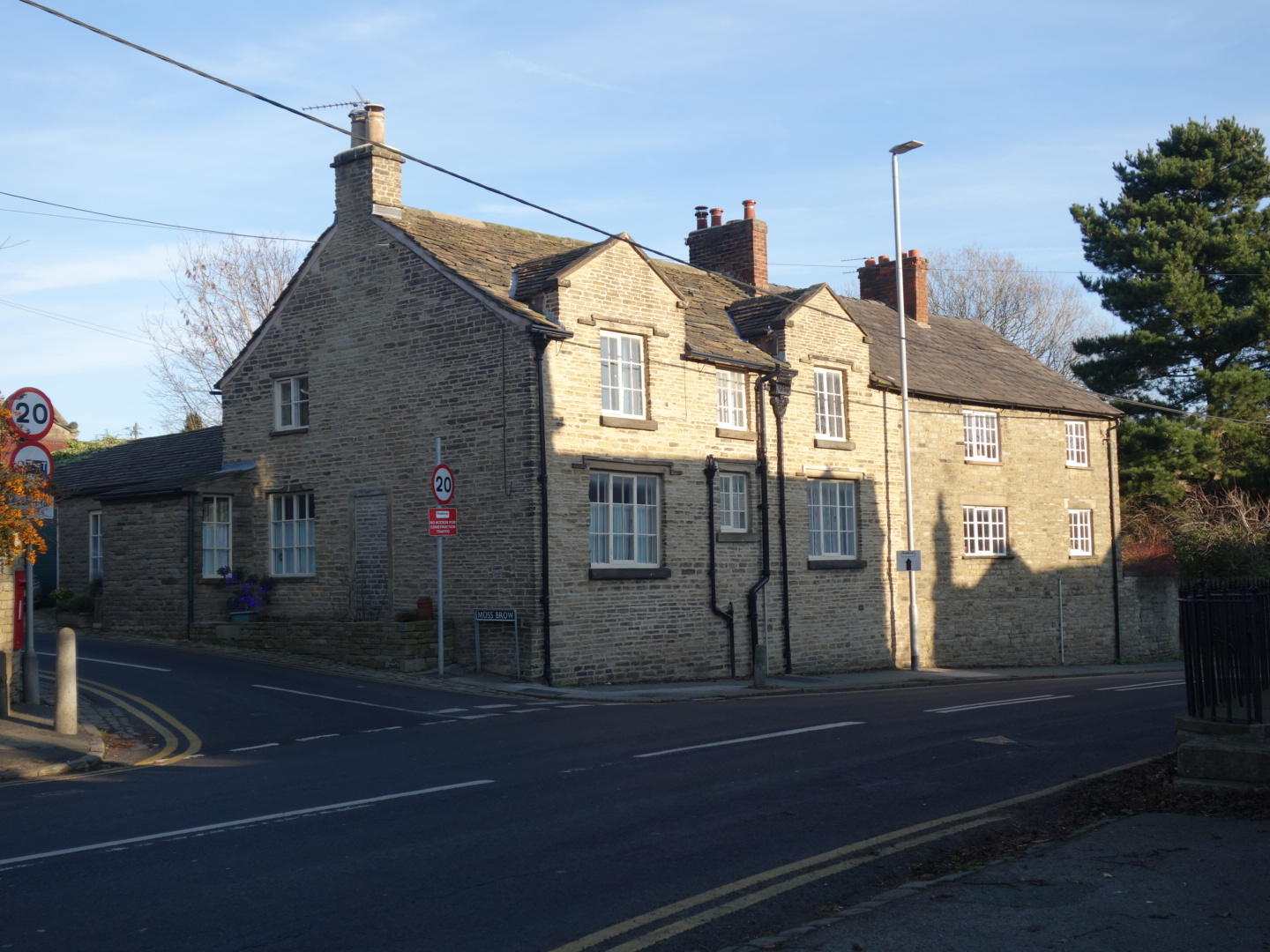 1 Moss Brow better know once as The Corner Shop or Silcock’s. Photo left is in the 1960s and the right photo is 2019.

Built in 1771 with mid 19thC alterations and Kerridge stone-slate roof with two chimneys, one brick and one stone. Coursed, squared buff sandstone rubble and sandstone dressings. Two story near symmetrical three bay south front. All the front is a 19thC alteration but has a rainhead inscribed RMW 1721, probably brought in. 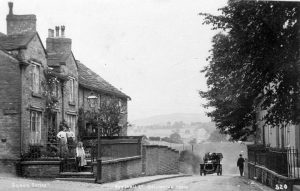 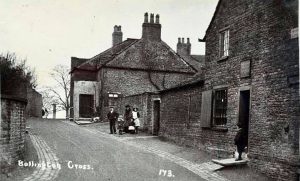 The two photographs above were taken in the early 1900s whilst there were still gardens at the front of The Corner Shop. These were removed around 1930 for road widening at the same time that Kingsway was built which was almost opposite.

1851: William Armitt a fifty eight year old Farmer of five acres lived here with his family. He was born in Mobberley. His wife Elizabeth of the same age was from Wilmslow. They had five grown-up children aged between twenty and thirty nine years, a niece aged twenty one years and a ten year old grandson living with them.

1861: William Armitt is still listed as living at 1 Moss Brow but as a shopkeeper as well as a farmer. He was widowed by now. Four of his grown up children and three grandchildren all lived with him.

1871: William Armitt junior aged fifty years was now head of the house and listed as a farmer of five acres.There is no mention of the shop. He had a young wife Harriet aged thirty two years. Also living there was his son Joshua from his first marriage. Joshua was a cotton piecer aged twenty one years. Three sons and one daughter aged between two to nine years from Harriet were also resident as well as a domestic servant from Northumberland aged sixteen years.

1881: William and Harriet were still listed as living at 1 Moss Brow with their four children. The two eldest William and Squire aged seventeen and nineteen were pupil teachers at this time. 1 Moss Brow is once again listed as a shop and William is described as a grocer and farmer of six acres (an extra acre has appeared).

1891: A new resident appeared at 1 Moss Brow, James Green aged thirty three years from Adlington and is described as a farmer and sub postmaster. His wife Margaret aged twenty five years from Dunham On The Hill is listed as a grocer. They had two children living with them, Herbert and Charles aged seven and twelve years, they were born in Runcorn and Dunham On The Hill respectively.

1901: James Green and all his family were still at 1 Moss Brow. His son Herbert was a butcher and Charles was a coachman and gardener.

1911: Arthur Blease was resident at 1 Moss Brow having moved up the road from Moss Lane, he was described as a farmer and sub postmaster. He was forty four years old at this point and came originally from Pott Shrigley. His wife Martha was just a year younger than him and was described as a grocer, she was born in Adlington. They had four children, James aged twenty one listed as a domestic and a chauffeur, Clarice aged nineteen was a dressmaker, Marion aged fourteen was an assistant in a dairy, and Herbert aged thirteen years was a scholar. All four children were born in Bollington Cross. In 1919 Arthur and Martha were registered as living at Holly House, Round Gardens. Herbert died as a result of an accident at Bollington Train station in 1919. It is believed that Arthur died in 1923 whilst living at 79 Wellington Road. 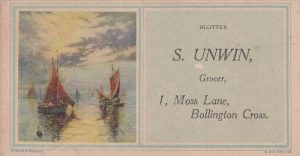 1939:  1 Moss Brow was simply named ‘The Shop’ on this census form and was occupied by grocer Sam Unwin who was aged sixty at this time, and his fifty year old wife Emily. They had first appeared on Kelly`s directory as living at 1 Moss brow in 1923. However, they both actually lived at number 9 Moss Brow at this time with Dorothy Thorpe an evacuee with three or four children.

At some point in between the Unwins and the Whitehursts, the Silcock`s Walter, Rosie and their son David lived at the shop which then became known simply as Silcocks.

By 1971 Margaret Naden and her family managed the shop for ten years finally selling it to the current owners who did run it as a shop for a while but it is now their domestic home.

website. Our thanks go to Linda Stewart who has researched census information to present an interesting history of the house’s residents.