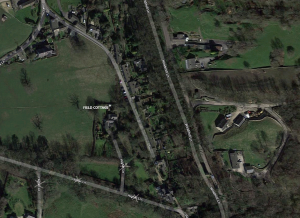 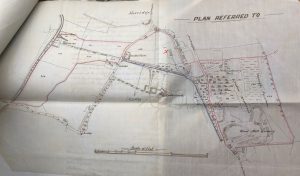 The 1875 map above shows Field Cottage’s position (x) on the Endon estate. Note at this time Endon Hall was named Endon House.

Field Cottage is hidden away off the Rally Road as it is known. No photos have been found of Field Cottage yet apart from an old one of poor quality.

The Tithe map of 1849 states that the owner of Field Cottage was William Clayton. The occupier was Samuel Williamson.

1871: Abraham Williamson and his wife Caroline R. lived at Field Cottage, he was thirty six years old and she was thirty years old. Abraham was from Whitworth in Manchester and was a stone merchant. Caroline was from Macclesfield. They had two children Edgar aged six years and John aged two years, both were born in Bollington. Caroline’s mother Louisa Cooper, a widow, was also living with them, she was sixty four years old and originally came from Prestbury. There was also a servant named Callum Norbury aged fouteen years and from Hanley in Staffordshire.

1890-1899: William Avery was resident at some point between these dates.

1900: According to the electoral roll William Baguley was living at Field Cottage this year.

1901: Richard Barnes was occupying Field Cottage (described as ‘cottage in a field’ on this census) along with his wife Mary Ann. Richard was a fifty four years old retired cotton goods warehouse manager and came from Manchester. Mary Ann was a year younger and originated from Oldham.

1906: Joseph Webster Warhurst was the resident at Field Cottage.

1911: Joseph Webster Warhurst was still at Field Cottage along with his wife Annie from Tipperary in Ireland. They were aged forty five and forty two years respectively. Joseph was a cotton goods merchant from Manchester. They had two children J. Wilson aged eleven years and W. James aged nine years. Both are described as students and both were born in Bramhall, Cheshire. There was also a twenty three year old servant named Julie Evans living at Field Cottage, she was from Peterford in Shropshire. This family were still at Field Cottage in 1915.

1921-1924: Field Cottage was occupied by Alan Murray Gordon Debenham according to Kelly’s Directory and the Electoral Roll.

1926: Kelly’s Directory indicates that Field Cottage was occupied at this time by Ellis Edward Spence and Marjorie Doris Spence.

1939: Lucy Plummer lived at Field Cottage and several other people, mainly housekeepers. Possibly Field Cottage was a servants house for Endon House as there was no Head Of House?

Below is a recent view of Field Cottage taken in December 2018. No further information is available although the current owners have been contacted, so any historic information would be greatly appreciated. 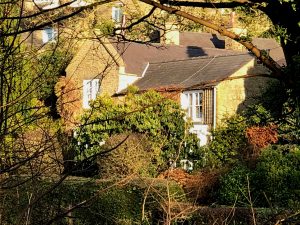