A stone building on the south side of Palmerston Street (which was once called Great High Street back in 1841) just to the right of the current entrance to Tullis Russell’s paper mill at Lower mills. At one time it was occupied by a Bank so one might have thought that was the origin of the name, also known as `Bankfield` House in 1941. But it is clear that it had the name long before and whilst it was a private residence. It is located on the bank above Pool Bank! It was home to the local branch of the National Westminster / NatWest Bank during at least the 1960s and much of the 1970s before they moved to new premises at Ashbrook Road (now occupied by Bollington Vets). Bank House is today used as offices by local businesses. 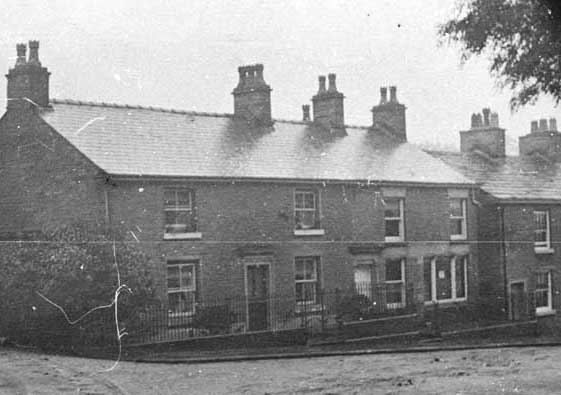 1841: John Oldham a farmer aged Forty Five years lived at Bankfield House with his wife Mary aged forty years and their five children aged from five to twenty years, the youngest being twins.

1861: Thomas Warburton aged forty one and from Stockport live at Bank House in this year. He was a clock and watch maker. He was a widower and lived with his four children aged between five and fifteen years. All but the eldest were born in Bollington, the eldest was born in Stockport. The two eldest were both cotton piecers.

1871: Mary Broster Orme a widow lived at Bank House, she was sixty two years old. Her son James also lived with her he was thirty three years old and was a stone mason from Bollington. They had a lodger named Charlotte E Holden aged twenty one years.She was a school mistress from Gloucestershire.

1881: Mary Broster Orme, still lived at Bank House, she was now listed as a housekeeper although was surely retired by now. Her daughter Mary Elizabeth Orme aged thirty five years also lived there and was a general servant born in Bollington. There was also a lodger living with them, Cornelius Clark aged twenty nine years. He was a Surveying Officer Excise.

1902 to 1911: Edward Seynor Stone born 1875 and manager of Ingersley Clough mill lived at Bank House with his wife Eva who was born 1881 in London. They had three children all Bollington born and also a maid Lucy Blower from Staffordshire. Visit http://bollingtonphotos.co.uk/showLookup.php?title=Stone&tab=1&terms=2120,2122,2138,2150

to see photographs of the lovely Stone family at Bank House taken mainly by Edward who was a keen amateur photographer.The huge shoe in the photos was borrowed from the shop across the road.There are only two children named in the photos, Len (died 1958) and Maisie (died 2005) but there is one photo of Edward`s wife Eva holding a small baby which is probably Donald born 1910. Edward was actively involved with the Bollington Rifle Club around 1908 . And when the Happy Valley Lodge Of The Royal Antediluvian Order Of The Buffaloes formed in 1904 Edward was a member and later a leading official.The Stone family were at Bank House until 1911 then moved to Macclesfield. Edward sadly died the following year from scarlet fever.

Incidentally prior to living at Bank House Edward lived as a single man with the Challinor family in Henshall Road on the 1901 census.He is listed as a boarder with his brother Thomas. They were both Calico finishers and both were originally from Manchester, Edward worked for Ingersley Vale Bleachworks later becoming manager. However Edward married Eva Marion Harper down in Kent in 1903 then they must have traveled back to Bollington to live in Bank House soon after as their first child Leonard was born in Bollington in 1905.

1926: Joseph Michael Blackett lived in Bank House, he was born in 1866 in Salford. He had previously been living at 41 Shrigley Road on the 1911 census with wife Annie, their two children and Joseph`s brother.

My thanks go to those who researched and discovered the history that is presented in these pages. Please read the full acknowledgement of their remarkable achievement

Please don’t chuck out those historic documents and pictures! Find out why here.