Built by John Brier, then owner of Oak Bank Mill, this large house was constructed in 1858, overlooking the mill. His development included Oak Bank Lodge cottage at the end of the drive where it adjoins Shrigley Road, a coach house used for stabling of horses and garaging of the carriage, and landscaped gardens which included a large number of trees, rockery around the edges of the original quarry, and a summer house on top of the hill above Beeston quarry with a path up the hill to reach it. The main drive from Shrigley Road passed along the lower garden before turning up to the front door (picture below). Much of this drive is today buried beneath the gardens of the present houses. Today’s Oak Bank Drive is largely the original access to the coach house and the tradesmans’ entrance to what was the back of the original house.

The site of this house was originally a quarry, part of Beeston quarry, cut into the hillside. In order to provide an adequate and private location, Brier built a huge terrace wall around the lower side of the site. This extends for several hundred feet in length and varies in height up to 16 feet (4m) high. At some points there was a rake of two or even three terrace walls, one above the other up the hillside. A flight of steps provided access down to the the back of the mill. All of these features remain today, though the steps are no longer accessible. 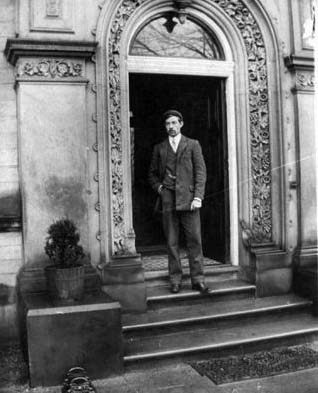 The house was built of local stone. Regrettably, we don’t have a picture of the full house, but a few pictures showing just small corners, such as that including the front door (left) and the side and garden (below), and a side door in the wedding picture (bottom). However, that is enough to show that this was a sumptuous mansion. The front door frame was particularly elaborate surrounded by a beautiful stone frieze. Dr John Coope believed that this might well have been carved by the Kerridge sculptor, Alfred Gatley.

1861: The builder of Oak Bank House John Brier from Manchester lived here aged forty nine years and was described as a Calico Printer, Spinner and Manufacturer and employed 200 people (at Oak Bank mill). His Yorkshire born wife Elizabeth was thirty six years old. They had five sons and one daughter at this point aged between one year and nineteen years and were all born in Bollington except the eldest who was born in Rainow. They had three servants, one of which was from South Africa’s Cape of Good Hope!

1871: John and Elizabeth Brier was still at Oak Bank House with their children although two are not mentioned and there are two extra children aged six and nine years. The two eldest boys were a Cotton Spinner and a Printer.

1881:  Frederick Wilkinson a cotton yarn agent from Stockport was now occupying Oak Bank House with his family. Frederick was forty one years old. His wife Frances was thirty four years old and was born in Manchester. They had three children aged between five years and thirteen years and a niece aged eleven years living with them. Frederick`s widowed brother James aged thirty nine years also resided here along with three servants and finally a governess from Aberdeen. None of the household were born in Bollington.

1896 Kelly’s Directory and the 1901 census: James Alexander Wilson aged fifty eight years lived at Oak Bank, he was a Calico printer. Also living there was his daughter Emily aged nineteen years and son James of eighteen years, and one servant.

1900: Charles and John Brier are still listed as owners(?) of Oak Bank House on the Kelly`s directory

There is thought to have been a fire in 1905 which damaged part of the house. The undamaged part remained in occupancy until about 1930 when it was abandoned. 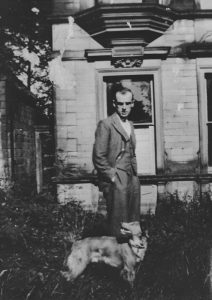 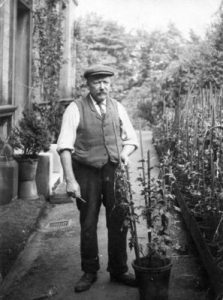 Harold Gould (far left) at Oak Bank House around 1930, he was father of Ruth and Rosemary pictured below, and lived down the drive at Oak Bank Lodge. The gardener is Charles Frederick Price (or Pryce), whose family (see picture at bottom of page) lived at Oak Bank Lodge cottage in the 1890s to early 20thC, before the Goulds.

Local children played on the site for many years after and regarded the partly roofless building as very spooky!

The local scouts used the separate Coach House as their scout hut. There were huge greenhouses on the bank above the house, complete with a boiler house to provide heating.

At some point around the end of WWII the house was demolished and most of the stone was removed from the site. The flat ground including where the house had stood was then concreted over and the whole site including the lower gardens was used to stockpile coal. At some point the last of the coal was removed and the site closed up. Nature took over and very large numbers of sycamore trees grew over the site and among the surviving original trees.

A search of Google books for J. Brier brings up some indications of John Brier jun’s (probably son of the house builder) interest in gardening and photography:

Gardening Illustrated, 1891, volume 12
‘Mr. J. Brier, jun., Oak Bank, Bollington, near Macclesfield, for a photograph of a view on the lawn at Oak Bank.’

The Photographic news: a weekly record of the progress of photography: Volume 21
‘Mr. J. Brier, jun., proposed such a plan in the YEAR-BOOK OF PHOTOGRAPHY for 1876, and there are earlier suggestions to the same effect.’

I haven’t seen the picture from Gardening Illustrated. If he was so interested in photography, what a pity that we don’t have a collection of pictures of the house and its garden, not to mention pictures of the rest of Bollington.