(with Rainow View and Shrigley Rise) 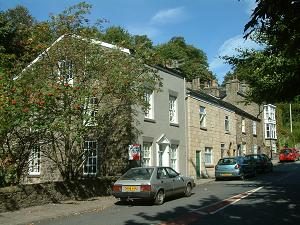 Shrigley Road runs from the junction of Palmerston Street, Church Street, Ingersley Road and Hamson Drive out of Bollington towards Pott Shrigley. At the lower, town, end the properties are stone cottages (left) with the occasional detached house.

The two most notable properties are 4 Shrigley Road, a stout detached house beside the river which used to be a shop, and number 18, Newbridge House, built in 1794 and occupied by the general manager of Oak Bank Mill. The mill, a cotton printing works, stood where Hamson Drive is today.

The near end house in the picture above was occupied by Joseph Hamson. He was a plumber and decorator and set up business there in 1806. His descendants continued the business there and his several greats grand-daughter, the late Cllr Betty Bonson, lived in Bollington into the 21st century. If you look closely at the end wall of 6 Shrigley Road you will be able to see the faded remains of the large advertisement for the business painted on the stonework.

; II, 18thC. The original stone was seriously damaged in a road accident and has been replaced in June 2009 with a new and larger stone bearing the same inscription as the original – S (Shrigley) on one face, B (Bollington) on the other. The stone stands at an angle to the road because the boundary crosses the road at that angle!