1841: Joseph Brooke a cotton manufacturer was living at Limefield house aged thirty years with his wife Anne of the same age and their four children John, Joseph, Anne and Henry together with four servants.

1851: Joseph Brooke still lived at Limefield but with his second wife Sarah (Dalton). His first wife Anne died on 29 July 1849 aged just forty three years and just two months after the birth of her youngest child Arthur on 27 May 1849. There were five children there at this time John, Mary, Eleanor and Emma. Emma Francis Brooke (1844-1926), the fifth child of Joseph and Anne became notable for her writings – see the Brooke family page for more on this.

1861: Joseph Brooke was still resident but with no wife present on the census day. He had one child and two adult children living with him, the youngest was nine year old Florence Dalton Brooke whose mother was Sarah Dalton, Joseph’s second wife, together with five servants.

1871: Joseph Brooke was still at Limefield with three adult offspring who were Henry aged thirty years, Mary Eleanor aged twenty eight years and Emma Frances aged twenty six years along with four servants. Joseph died in 1872. His second wife Sarah lived until 1891 but it is not known where she was on the 1861,1871 and 1881 censuses.

1881: Alfred Higgins aged thirty five years lived at Limefield with his brother Henry aged thirty seven years and who was the head of the house. There was also a younger brother named Arthur who was aged twenty nine years. All three brothers were cotton machine makers and were unmarried. They had two servants.

1891: The Alcock family (farmers) now lived at Limefield. The head of the house was Erick from Congleton, he was aged twenty seven years. Erick was living with his wife Emily of the same age, she was from Newcastle-under-Lyme. They had a three year old son. Erick`s mother Mary Ann, aged sixty six years, also lived with them. She was originally from Rushton. Finally there was one farm servant.

Alfred J. King lived at Limefield in 1892 to at least 1898. By the 1901 census he was living nextdoor at Rock Bank House. Alfred King was Member of Parliament for the Knutsford constituency which included Macclesfield from 1906-1910. He owned manufacturing businesses in Bollington. However, the Kelly’s Directory also had R.B.Martin living at Limefield in 1896. Perhaps he had a business at the stables, (see the photo of the stables below as of 2018). R.B Martin was still there in 1906.

1901: Walton Aston lived at Limefield, he was aged thirty nine years. He lived there with his wife Katherine and baby daughter who was aged just three weeks. He was an architect and surveyor who designed buildings in Macclesfield and Rainow. Walter Aston died on January 29 1905 in Bollington at the age of forty four years.

1911: Robert Brearley Martin, a fifty one year old bank manager from Bolton was living at Limefield. Living with him was his forty one year old wife Annie Jane from Little Shilton in Lancashire, and their Prestwick born eighteen year old daughter Phyllis. They had a servant named Annie Bryer who was twenty six years old and was born in Kendal in Westmorland.

1914: Private Leonard Haigh Army Service Corps M2/194141 lived at Limefield, (see photo below right). He was born on 19 October 1880 in Prestwich. Leonard was the son of Charles Henry Haigh and Alice Clara (formerly Paley) and was baptised in Prestwich on 10 December 1880. He lived at Wilton Terrace, Prestwich in 1881, then was at boarding school in Southport in 1891. Leonard was a cotton spinner visiting a family at Wood Lane, Timperley in 1911. 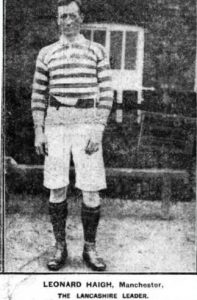 He was buried at Pott Shrigley and is named on the memorials at Bollington and St Oswald’s.

1914 and 1923: Samuel Knight lived at Limefield, according to the Kelly’s Directory. He was possibly a thirty eight year old Bollington born Clerk for Urban District Council, with a wife Edith and daughter Dorothy aged six years.

1939: Stephen Sheldon, a cattle dealer and farmer lived at Limefield House. He was forty eight years old. His wife Daisy, aged forty five years and their son Kenneth aged nine years also lived there, and later there were five more children. Later Kenneth’s son Stephen was born at Limefield and lived there until 1968. During this time a ‘Prince? ‘ also lived there apparently, although this has seemingly been shielded on the 1939 census. Other occupants were Florence Watson and an elderly spinster (although works out to be just fifty six years old) named Miss Bullock.

She was most likely the same Miss Bullock as on the 1926 directory. She remembers arriving at Limefields aged just ten years and walking through the orchard and down through the gate in the wall leading to Beeston Brow around the early 1900s

Later, at least during 1970-77, Drs John & Jean Coope and their children lived at Limefield. It was used for committee meetings, rehearsals, fetes, money raising parties etc. At one point they shared it with Stephen Sheldon who farmed land in that part of Bollington and Adlington parishes.