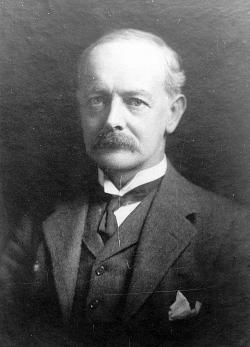 Industrialist, Councillor and Member of Parliament

The following extracts are from George Longden’s report to the KRIV project[1] ….

Alfred J. King was living at Clough Cottage (formerly Clough House, I presume) by 1890 (45)[6], and may have been effectively in charge by then. Under A.J. King the firm seems to have been a progressive and expanding enterprise. Various developments had a physical impact on the Ingersley Vale site. The first were the extensions of 1895. The local paper announced that these were to consist of a one storey shed, 82 feet square, to “accommodate a number of calendars used in the process of bleaching”, and a two storey warehouse, 40 feet by 25 feet. These were to be situated south of the mill, built across and to the east of the river – the northern end of the block of buildings which can be seen today [2005, since demolished]. The shed occupied the former lawn of Clough House. The house was demolished, and A.J. King moved to Rock Bank House. It was decided to drive the new machines by electricity, and use electricity to light the whole works (20, 23 Mar 1895, 22 Jun 1895, 5 Oct 1895)[7]. … 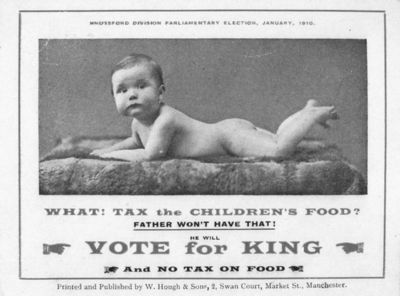 A.J. King lived at Limefield (1898) and became a progressive Liberal member of the Bollington Urban District Council, and played an important role in the completion of the waterworks scheme and in instigating a drainage scheme with a sewage works for the village. He represented Bollington on the Cheshire County Council from 1901 to 1906, and from 1906 to 1910 was Liberal MP for the Knutsford Division [which then included Bollington. See election poster left]. After electoral defeat in 1910 (he was beaten by Col. Sir Alan J. Sykes

a big noise in the bleaching industry who in 1928 opened the Bowling Green in Ingersley Vale), Alfred King and his family moved to Windermere, where they were visited from time to time by parties of workers from Ingersley Vale (48, p33)[8].

Clicking the reference description takes you back to the text.