A Victorian Gothic house built in Clarence Road adjacent to Clarence mill in about 1840 by Martin Swindells I, but he never lived in it, and he died in 1843.

During WWI and WW2 Rock Bank House was used as a recovery home for injured servicemen.

Today the house and it’s stable block are divided into apartments and rather incongruously, and regrettably, known as Carterbench House. The land behind the house, once part of the estate, contains the houses’ of Rock Bank Rise.

1851:Widower Martin Swindells II of the Swindells family, aged thirty seven years was resident. He lived with his son Martin, and twins(?) Frederick and Hannah aged six years. They had four servants one of which Martin later married. Her name was Charlotte Rowley and she was twenty six years old. Previously Martin had lived in Clough House, Ingersley Vale with his first wife Frances.

1861: Martin Swindells II was still at Rock Bank with his now wife Charlotte (was a servant on previous census) aged thirty six years. They had eight children.

1871: The Swindells were still living here but had by now got nine children, three more had been born since the last census, and some had left home.

1876: Rock Bank House was sold by Martin Swindells II to Fred Wilkinson a director of Brooke, Swindells and Co.

1891: George Cawley Swindells was the resident in this census, he was forty three years old and was a cotton spinner and doubler. He lived at Rock Bank with his wife Helena aged thirty eight years and their two children, Bernard aged three years, and Agatha aged one year. There was also a sick nurse and a cook.

1901: Alfred J King aged forty two years lived at Rock Bank House having previously lived next door at Limefield . He was an MP for the Knutsford division which included Bollington. His company A J King & Co. owned Ingersley Vale Mill. Alfred lived with his daughter Ida May aged eleven years and two sons John seven years old and Philip four years old. There were also four servants and a visitor on this day. Alfred is listed as married but his wife does not appear on this census. Alfred ‘lent’ Rock Bank House to be used as a hospital in WWI, see photos below. (Click on images to enlarge). 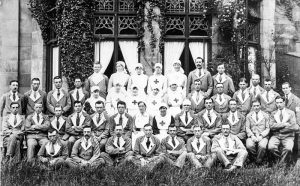 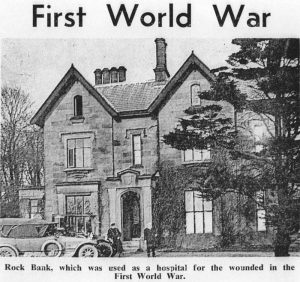 1939: Richard Holt aged fifty eight years was a caretaker at a cotton mill. He lived with his wife Sarah who was sixty years old and described as a Housekeeper at the same mill as her husband.

1960s and 1970s: Stockdale Engineering were at Rock Bank. They were filtration engineers, filtering particles of water waste from heavy industry. They had installed steel girders in one part of Rock Bank.

1970s: A company who tested pregnancy samples also occupied Rock Bank on the ground floor to the right of the main entrance.

1980s: The company Carterbench Advertising came from Poynton to Bollington in the early 1980s. It occupied Rock Bank House until it merged with Manchester based Brunnings. There was a subsidiary company Carterbench Product Development that designed toys. They separated and moved to Cheadle following the merger with Brunnings, and came back to Fernbank House on Tytherington Business Park in 1995, then finally to King Edward Street in Macclesfield in 2018. Notable toys they created in the 1980s were, ‘The Big Yellow Teapot’. There were close ties with Peter Pan, Bluebird and Kiddicraft during their time at Rock Bank. Some of their long term clients were Cheshire Building Society, The Isle Of Man Steam Packet Company, Holland’s Pies and Peter Pan. When they moved into Rock Bank the laboratories had been on the upper floor. Dragon TV rented the middle floor until they moved to what was once the Congregational Church (Churches) at the bottom of Beeston Brow, and Carterbench had the ground floor and later the upper floor until taking over the entire building. The basement had an art studio run by Dennis Gideon.

The long building at the back of Rock Bank House as seen on the aerial view below was used as a drawing office plus a workshop where prototype designs were made and tested, of what is not sure. And it was also used for Chemical research. This long building was knocked down in the 1980s and new houses built there which is now called Rock Bank Rise.

History has it that Rock Bank is haunted. One of the top rooms reverts to a Victorian nursery and the ghost of a nurse stands at the top of the stairs. There have been many sightings!

And in the 1980s it is believed there were old stone slabs in the cellar as it had been used as a morgue. 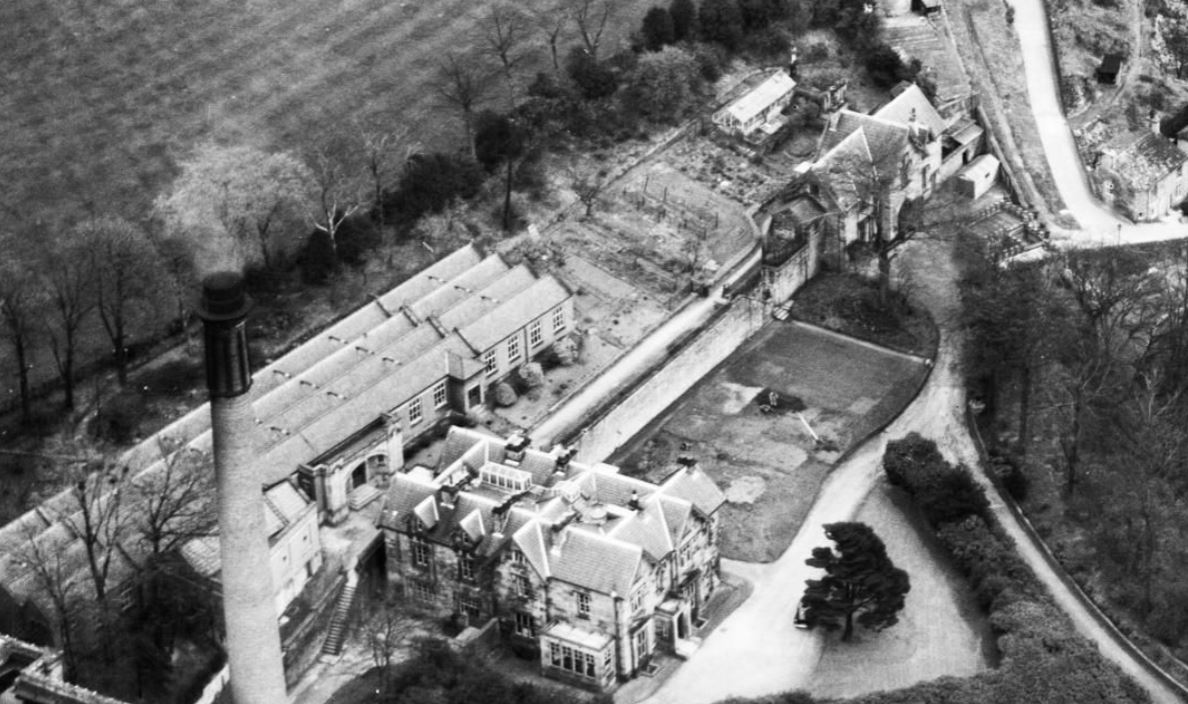 Above, an aerial view from around 1920. Rock Bank House in the foreground along with part of Clarence Mill chimney – history. The long buildings to the left are described above. At the top of the photo are the stables at The Coach House which is now a private house/apartments. There used to be an entrance to/from The Coach House from Beeston Brow on the bend. It is visible half way down on the right in the photo above. Evidence of this entrance is still there today. See photo below from 2018.